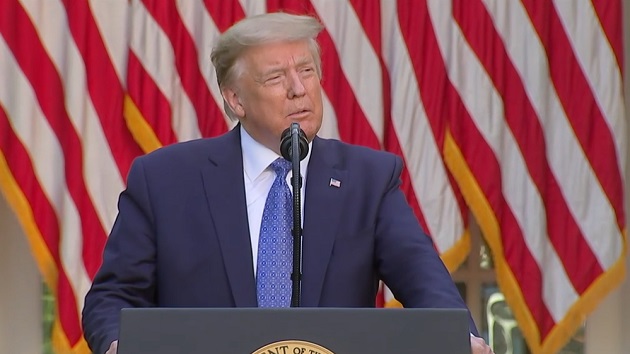 (WASHINGTON) — BY: JORDYN PHELPS, BEN GITTLESON, and LIBBY CATHEYAs the Trump administration fields a global pandemic and nationwide protests, the White House Wednesday afternoon released President Donald Trump’s latest physical results, with his physician writing that Trump “remains healthy” and experienced no side effects from taking hydroxychloroquine as a prophylactic against the novel coronavirus.In a memo made public from Dr. Sean Conley, the president’s physician said the findings are based on examinations between November 2019 and April 2020. “There has been no interval change to the President’s medical history,” Conley wrote.Results showed the president weighed in at 244 pounds — up one pound from his last reported physical — passing the official threshold of being considered obese for at least the second year in a row.The president’s lab values and test results were within normal range, including his screening for diabetes (A1C), high cholesterol (lipid panel) and high blood pressure — important conditions to look for in an obese individual, according to medical experts.Trump’s heart was also monitored via an electrocardiogram, or EKG, while he was taking hydroxychloroquine, a drug the president repeatedly touted amid the coronavirus pandemic but that has, separately, been linked to increased risk of cardiac arrhythmias. Patients taking any medication that has a known cardiac side effect generally will get an EKG prior to beginning the medication, then periodically at the discretion of their physician.ABC News medical experts did note, however, that someone on a short course of hydroxychloroquine would generally not get periodic EKGs, so this was likely monitored out of an abundance of caution.The president’s cholesterol level slightly improved to 167 from 196 the year before.White House press secretary Kayleigh McEnany announced earlier Wednesday that the president’s annual physical had been completed and that the results would soon be made available to the public.McEnany’s announcement was unusual because the president typically travels to Walter Reed National Military Medical Center to complete his annual physical., but has not made a recent trip to the hospital.Trump did make an unannounced trip to the hospital in November, when the White House said he was completing “portions” of his annual physical exam, in a visit that lasted more than two hours.Former White House press secretary Stephanie Grisham said at the time, “Anticipating a very busy 2020, the president is taking advantage of a free weekend here in Washington, D.C., to begin portions of his routine annual physical exam at Walter Reed.”While Trump’s 2018 and 2019 physicals were both announced ahead of time, the 2020 physical was not.After the president’s last full physical examination in February 2019, Dr. Conley released a memo saying Trump was in “in very good health overall” and should remain so “for the remainder of his presidency and beyond.”Exam results at the time showed that at 6-foot 3-inches tall, Trump had a body mass index of 30.4, passing the official threshold of being considered obese. He weighed 243 pounds — up seven pounds from September 2016, before he became president. Results also showed that Trump had increased his daily dose of rosuvastatin, a medication used to treat high cholesterol.One year prior, Trump’s first comprehensive physical as president revealed he had a common form of heart disease and high cholesterol. Then-White House physician Dr. Ronny Jackson suggested a reasonable goal for the president would be to lose 10 to 15 pounds, but he praised Trump for otherwise “excellent health.””It is called genetics,” Jackson told reporters in the White House Briefing Room in January 2018. “Some people have just great genes. I told the president that if he had a healthier diet over the last 20 years, he might live to be 200 years old.”Trump is the oldest president to ever take office. He doesn’t drink alcohol or smoke, but he is known to enjoy fast food, steaks and ice cream. Golfing is his primary source of exercise.