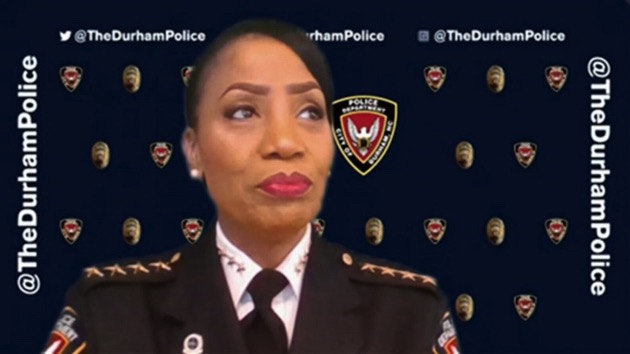 By CATHERINE THORBECKE, ABC News(NEW YORK) — The head of the National Organization of Black Law Enforcement Executives called for “sweeping changes and police reform” as she reacted to the nationwide protests taking place over the killing of George Floyd.”The emotions and feelings that we see expressed out on the streets of cities all across the country are felt in a way that are substantiated,” Durham Police Chief C.J. Davis, who is president of one of the leading black law enforcement groups in the nation, said in an interview with Good Morning America on Wednesday.”There have been years and years of systemic racism in law enforcement,” she added.Davis called on police forces across the country to “continue to work with our protesters and individuals in our communities so they can have the opportunity and the space to express themselves.”At the same time, she said that “we have to take care of our community.””We’ve got to continue to work together so that these types of opportunities to heal are done in a way where everyone is respected,” Davis said.Davis also said she has been advocating for a nationwide ban on chokeholds and the neck restraint that was used by a Minneapolis police officer on Floyd.”We also need nationwide standards,” she said.Police policies cannot be treated like a “smorgasbord,” she went on, “where agencies have an opportunity to say, we will take chokeholds, or no, we won’t take chokeholds.”She called for nationwide accreditation to ensure that “every agency, large and small, have the best practices in place.””We don’t want to see this anymore,” Davis said. “So we definitely need some standards in our police reform.”New York City Police Department Chief Terence Monahan echoed Davis’ sentiments, saying that law enforcement leaders have “to be able to take a good hard look at their agencies and see what they need to do to be able to bridge that gap between their cops and their communities.”Houston Police Chief Art Acevedo, who is in the process of helping Floyd’s family plan funeral arrangements, said police chiefs are “going to put those reforms forward.””Then we’re going to let the people in the community know which Democrat and which Republican and which Independent voted, how they voted,” he said. “Because they’re going to have to make a choice, we’re not going to let them vote in the dark.”Acevedo noted that for people in the community who are “hurting” and want change, “we’re going to offer them that change.”

The push for electric vehicles may be killing sedans for good: Experts
Iowa Republican Sen. Chuck Grassley, 88, running for reelection
GOP-led review of Arizona ballots reaffirms Biden’s win
Harris interview with ‘The View’ delayed after co-hosts test positive for COVID-19
Generational wealth implications: Black and Latino-owned homes are more likely to be undervalued
Nick Cannon teases possibility of having more children: “My therapist says I should be celibate”