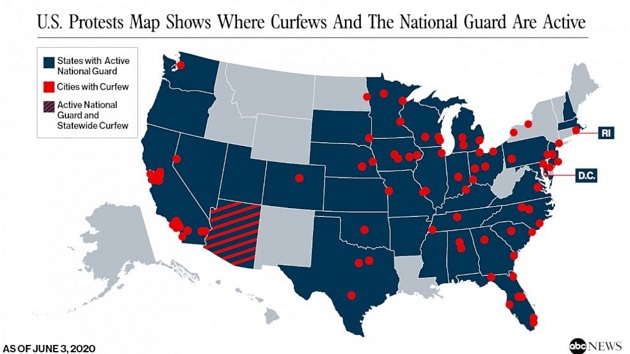 (NEW YORK) — BY: JACK ARNHOLZ and IVAN PEREIRAThirty-one states and the District of Columbia have activated their National Guards, with nearly 80 localities implementing curfews in response to the nationwide protests following the death of George Floyd.The historic orders follow a weekend that saw protests erupt across dozens of U.S. cities. At least 9,300 people have been arrested as of Wednesday, according to The Associated Press.”As of Wednesday morning, a historic 74,000 National Guard soldiers and airmen were activated for domestic operations across the United States,” the National Guard Bureau said in a press release Wednesday.The number surpasses the 50,000 National Guard troops that were activated during Hurricane Katrina in 2005. By comparison, there are roughly 9,000 U.S. troops currently stationed in Afghanistan and 5,000 in Iraq.Approximately 39,400 National Guard members are continuing to support the COVID-19 response efforts in all 50 states, three territories, and the District of Columbia.Minnesota Gov. Tim Walz first initiated the National Guard on Thursday after protests in his state descended into violence the night before. Since then, more than half of the country’s states have activated the National Guard to aid local law enforcement.Washington, D.C., has approximately 1,300 guard members from 10 states covering the nation’s capital, according to the National Guard Bureau.While New York state has not deployed the National Guard, Gov. Andrew Cuomo said in a press conference Sunday that the Guard is on “standby.” He said Tuesday that he did not send any New York troops to Washington, D.C.In addition to the nationwide National Guard deployments, localities across the country have implemented curfews.New York City, the site of some of the country’s largest demonstrations, announced Monday afternoon that the city would enact a curfew taking effect at 11 p.m.New York City Mayor Bill de Blasio later extended the curfew until Monday, June 8, with the curfew running from 8 p.m. to 5 a.m. each night.Several municipalities have also extended curfews.District of Columbia Mayor Muriel Bowser moved the city’s curfew to 7 p.m. on Monday — four hours earlier than what it was on Sunday.Los Angeles also announced that its curfew would begin at 6 p.m. on Monday. The city of Santa Monica began its downtown lockdown at 1 p.m., with the entire city under lockdown at 4 p.m.Despite Miami-Dade County maintaining a curfew earlier, Miami officials announced Monday afternoon that the city would lift its curfew order.Minneapolis, the site of Floyd’s death, announced a shorter curfew for Monday night, starting at 10 p.m. and expiring at 4 a.m., and later extended that curfew to run nightly through Friday morning.