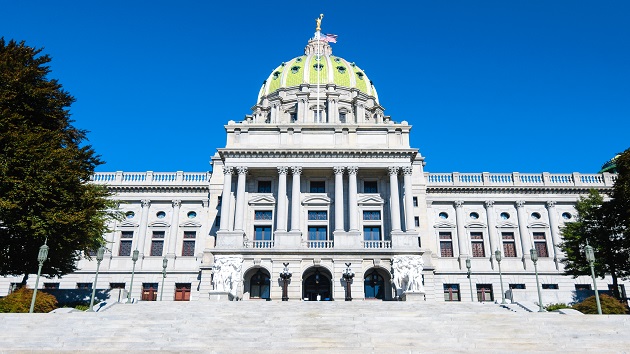 (HARRISBURG, Penn.) — BY: ELLA TORRESA Pennsylvania county commissioner is facing widespread calls to resign after remarks he made about the Black Lives Matter movement and the protests in Philadelphia over the death of George Floyd.Montgomery County Commissioner Joe Gale called the Black Lives Matter movement a “radical left-wing hate group” that was among the “perpetrators of this urban domestic terror.””This organization, in particular, screams racism not to expose bigotry and injustice, but to justify the lawless destruction of our cities and surrounding communities,” Gale said in a statement he issued on Monday on his website and Twitter. “Their objective is to unleash chaos and mayhem without consequence by falsely claiming they, in fact, are the victims.”He called the protests “a riot” with looting, violence and arson.Largely peaceful protests have erupted across the country, including in Philadelphia, against police brutality in the wake of the death of Floyd, a black man who died allegedly at the hands of Minneapolis police. One officer, Derek Chauvin, who was seen on video with his knee on Floyd’s neck for nearly nine minutes, has been charged with third-degree murder and manslaughter. Three other officers involved in the incident were fired from the Minneapolis Police Department.Gale went on to call systemic police brutality and racism a “narrative” pushed by the media.Research has proved otherwise.Black men are about 2.5 times more likely to be killed by police over their life course than white men, according to a research article published in August 2019 in the peer-reviewed Proceedings of the National Academy of Sciences of the United States of America.Black people are 1.3 times more likely to be killed by police while unarmed than white people, according to the database Mapping Police Violence which reviewed killings from 2013 to 2019.Gale’s comments were met with fury from politicians and the public.Valerie Arkoosh, chair of the Montgomery County Board of Commissioners, and Ken Lawrence Jr., vice chair, issued a joint statement denouncing Gale’s comments.”This statement, in no part, reflects the sentiments or opinions of the majority Commissioners or of this County government,” the statement read.”Our democracy celebrates the rights of citizens to express themselves in demonstrations and do so without fear. … To our entire black community: We see you. We hear you. We stand with those who are calling out the systemic racism and violence toward people of color in our country,” the statement continued.Council members of the Municipality of Norristown, which is the county seat of Montgomery County, issued a statement saying they were “deeply outraged” and urged Gale to resign immediately.”You assert that Black Lives Matter is a ‘radical left-wing hate group’ perpetuating ‘urban domestic terror.’ This is at the very least erroneous and at the most harmful to the safety and security of your constituents,” the statement reads.Gale also said Philadelphia Mayor Jim Kenney was among the “far too many Democrat mayors” who sympathize with “these far-left radical enemy combatants.”Norristown council members said while Gale decried Kenney, “we wonder how it seems you don’t have any empathy, compassion, or even the ability to hear your constituents. In this, we believe you have failed us as our county commissioner.”An online petition calling for the resignation of Gale has amassed more than 67,000 signatures and counting on Wednesday.Gale did not immediately respond to ABC News for comment. He has continued to post to his Twitter account, but has not addressed calls for his resignation. One of Gale’s posts condemned Kenney for having a statue of former Philadelphia Mayor Frank Rizzo removed.Rizzo was mayor from 1972 to 1980. His criticism, however, dates back to when he served as the city’s police commissioner and was accused of police brutality. As mayor, supporters said he was tough on crime, but critics said he discriminated against minorities.Kenney called the statue a “deplorable monument to racism, bigotry, and police brutality for members of the Black community, the LGBTQ community, and many others. The treatment of these communities under Mr. Rizzo’s leadership was among the worst periods in Philadelphia’s history.”