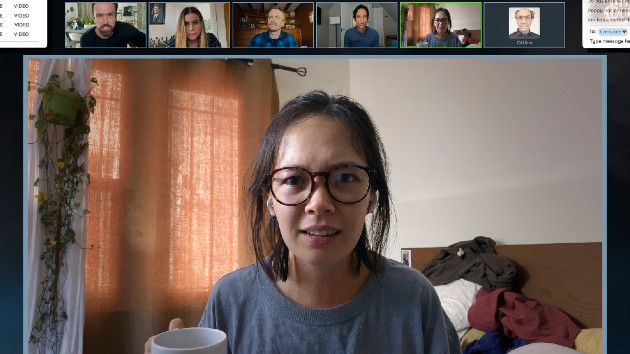 (LOS ANGELES) – The cast of Apple TV+’s workplace comedy series Mythic Quest: Raven’s Banquet centered on its characters in lockdown, and while a subplot of the episode has the characters competing to raise money for COVID-related charities, its cast actually donated a real-life $600,000.

The cast passed the hat for half that amount, and show co-creator and star Rob McElhenney and his wife, Always Sunny co-star Kaitlin Olsen, matched the sum.

“[Rob] came up with this idea…because…most people that have something to give have been giving,” Charlotte Nicdao, who plays frazzled project manager Poppy on Mythic Quest: Raven’s Banquet, tells ABC Audio. “And we thought it would be nice if we could say, ‘Yes, we raised the amount of money that in the episode we say we raised, and…if you don’t have anything left to give. That’s fine. We’ve done it."”

The show was shot by each cast member themselves, and Charlotte says they had to do “location scouting” in their own homes with the producers. “I…showed them different parts of my house. And I mean, this is going to seem like weird had flex that I think that my home is like more beautiful than what Poppy’s would be.”

Nicdao says, giggling, “I put work into my space. You know, it’s a small space, but I’ve tried to make it look nice. And so I was like, “Well, we can’t do it in here. It’s too nice. Poppy wouldn’t live here."”

However, her wardrobe was a snap. “I felt really lucky, actually, that Poppy is having a rough time and she’s not looking her best…So I felt absolutely no pressure to…look good or pick out good clothes to wear or even really wash my hair.”

Washington state deputy shot and killed in the line of duty
What to expect as surfing makes Olympics debut
What to know about antibody tests in a post-vaccine world
Key moments from the Olympic Games: Day 1
What is a Golden Slam? Novak Djokovic looks to make men’s tennis history with Olympics
Maryland launches $1 million COVID-19 vaccination scholarship program