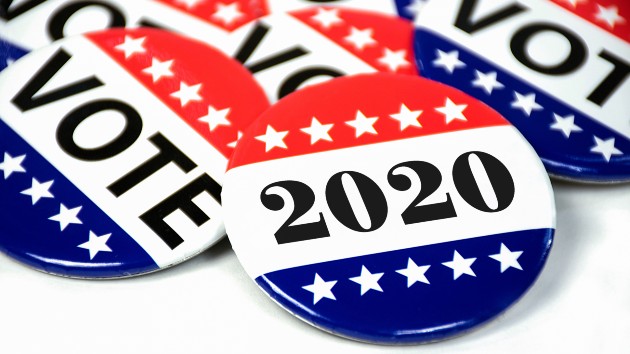 (WASHINGTON) — In the middle of dual crises confronting the country, voters in eight states and the nation’s capital head to the voting booth on Tuesday — for the single-biggest day of voting since the onset of the coronavirus — restarting a primary season thrown into disarray after states postponed their contests, and injecting some new energy into a transformed campaign trail.The presidential primary and down-ballot contests come not only amid the unprecedented circumstances of a pandemic, but as the nation remains gripped by unrest and protests, fueled by anger and frustration over systemic racial issues compounded by the death of George Floyd, a black man who died after being pinned down by a white Minnesota police officer. Voters in Indiana, Maryland, Montana, New Mexico, Pennsylvania, Rhode Island, South Dakota and the District of Columbia are holding presidential contests, although the primaries for both parties are already settled with two presumptive nominees in former Vice President Joe Biden and President Donald Trump. Iowa, the first state in the country to hold a presidential contest with its caucuses on Feb. 3, is set to hold down-ballot primaries for the U.S. Senate and four U.S. House seats, among other lower-profile races.The voting will be an early preview of how states attempt to run elections if the virus continues to be a risk in the fall.But the primaries are also taking place against the backdrop of widespread clashes between police and protesters, as some leaders, including those on the frontlines of the protests, are urging Americans to vote to impel meaningful change on racial injustice.”If you want change in America, go and register to vote. Show up at the polls on June 9th. Do it in November. That is the change we need in this country,” Keisha Lance Bottoms, the mayor of Atlanta and one of the women in contention to be Biden’s running mate, said during a Friday night press conference as her city fell into turmoil.One day before the primaries, former President Barack Obama, in a lengthy Medium post, refuted the suggestion that voting alone is not enough to satisfy a weary electorate’s nationwide calls for reform.”I’ve heard some suggest that the recurrent problem of racial bias in our criminal justice system proves that only protests and direct action can bring about change, and that voting and participation in electoral politics is a waste of time. I couldn’t disagree more,” Obama wrote.”If we want to bring about real change, then the choice isn’t between protest and politics. We have to do both. We have to mobilize to raise awareness, and we have to organize and cast our ballots to make sure that we elect candidates who will act on reform,” he continued.The contests also come as the messages from those at the top of the ticket could not be more different.In the last week, as the president chose to stoke longstanding racial divides rather than trying to comfort a hurting community in a series of tweets, his November rival pushed for unity.”We are a nation in pain, but we must not allow this pain to destroy us. We are a nation enraged, but we cannot allow our rage to consume us. We are a nation exhausted, but we will not allow our exhaustion to defeat us,” Biden said in a statement released over the weekend.Amid the multiple days of demonstrations in city streets, local election officials are being forced to make some 11th hour adjustments to adapt to the ongoing protests.In Philadelphia, Gov. Tom Wolf announced on Monday he is extending the deadline for voters to return mail-in ballots by one week, until Tuesday, June 9 in six counties: Allegheny, Dauphin, Delaware, Erie, Montgomery and Philadelphia.The move comes after Mayor Jim Kenney said during a press briefing Monday that the city asked for “the state’s assistance in making sure our polling places were secure” and “for an extension of the deadline for mail in ballots.” Philadelphia has been under curfew for three straight nights.

“These actions are appropriate and much needed,” Kenney said.In Washington, D.C., Mayor Muriel Bowser instituted a curfew through Tuesday night starting at 7 p.m., but clarified that it does not apply to voters, poll workers or election officials and volunteers participating in the election.In Baltimore, a spokesperson for the city board of elections said they “cannot” predict what the protests will look like on election day or what the impact may be, but at least one ballot drop box closed early on Monday and was moved to a different location. The other locations for drop boxes in the city are set to reopen at 6 a.m. on Tuesday.In Iowa, although a spokesperson for Paul Pate, the secretary of state, told ABC News in an email that there are no last-minute changes to adapt to the protests, in an earlier email, the spokesperson noted that county election officials “are working with local law enforcement” and “there are procedures and plans already in place preparing for a variety of scenarios” without providing specific details.Voters heading to cast their ballots on Tuesday are also facing an alternate reality due to the coronavirus — one in which election officials abruptly changed their blueprint for running elections to adjust to social distancing and other state and federal guidelines.Of the seven states and the nation’s capital with primaries for the top of the ticket on June 2, more than half are delayed contests that were initially scheduled in April and May — reflecting the volatility brought on by the coronavirus.All of the states holding elections are relying on and expanding their vote-by-mail apparatus to adapt to the shifting public health conditions, even as Trump attempts to cast doubt on the integrity of mail-in voting.Before the pandemic, six of the states holding presidential contests allowed for no-excuse absentee voting. In late March, Indiana’s elections board ordered the expansion of access to absentee mail-in voting to all voters in the Hoosier state — without requiring an excuse. Election officials have spent weeks and months preparing for the one day of contests — second only to Super Tuesday — which look far different from only a few months ago.In interviews with election officials across the country, most moved quickly to prepare their staff and voters for the changes that the coronavirus placed on voting. Some states, like Rhode Island and Montana, have instituted changes to their voting system in recent years which have widely expanded vote-by-mail procedures. Others, like Pennsylvania and Indiana, are working around the clock to prepare voters and elections officials for the massive influx of absentee ballot requests.Across geographies and party lines, secretaries of states, local election boards and candidates themselves have given a strong endorsement of the absentee voting process, encouraging voters to request their ballots through applications in states which require them.But the contests, and the massive mail-in vote effort across each of the states, could serve as a harbinger for what is potentially ahead in the fall if the coronavirus outbreak persists.In South Dakota, an upper Midwest state that saw the highest number of COVID-19 cases per capita for the region in mid-April but currently has one of the lowest fatality rates in the country, election officials are confident the Tuesday primaries will run smoothly.”Since we didn’t change the laws, we’re just utilizing some of the tools we already have,” said Steve Barnett, the Republican secretary of state in South Dakota. “A lot of people are taking advantage of absentee voting.”But in Philadelphia, the largest city in Pennsylvania where there will be only 190 in-person polling places this election, a dramatic decrease from the 831 in last November’s municipal election, Commissioner Lisa Deeley told ABC News she is “extremely worried” over the influx of absentee ballots just for the primary, which only portends concerns expected in November when turnout is far higher.”The numbers that we’ve seen this primary are pretty incredible and we know that there’s much more activity in the general election,” she said, adding that after Tuesday’s election is over, local election officials will be convening a working group to figure out a plan for processing returned ballots for the general election.”We all hope, as everybody does, that we’re somewhat back to normal by November, but to risk that we’re not, it would really create an issue for us. We could see 400,000 to 500,000 applications in an election like that,” she said. Copyright © 2020, ABC Audio. All rights reserved.

Coronavirus updates: How CDC director says we can get virus under control
Demand for plastic surgery is up, even with coronavirus
Biden unveils ambitious plan to reach 100% clean electricity by 2035, pour trillions into green energy
Coronavirus updates: Florida has 48 hospitals with no ICU beds
Down-ballot races across Alabama, Maine and Texas revolve around Trump: 5 things to watch on Tuesday
US will restart visa services, State Department says, amid Trump’s efforts to restrict immigration