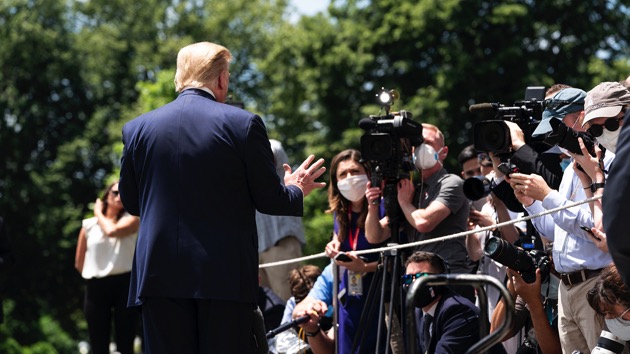 By JORDYN PHELPS and BEN GITTLESON, ABC News(WASHINGTON) — It was a made-for-TV moment.President Donald Trump, Bible in hand, posing in front of the historic St. John’s Church a block from the White House Monday night, the day after the church’s basement apparently was set on fire by protesters.It came at a cost.Demonstrators who had been peacefully exercising their First Amendment rights in protesting the death of George Floyd and racial injustice in policing were pushed back, forcibly, with the use of flash-bangs and tear gas to make way for the president.But the morning after the photo-op, which has been roundly criticized, Trump found no cause for regret as he posted on Twitter with his praise for the night’s events, that included the presence of hundreds of law enforcement and National Guardsmen in front of the White House.”D.C. had no problems last night,” Trump wrote on Twitter. “Great job done by all. Overwhelming force. Domination.”The president directly congratulated himself for what was a quieter evening than those over the weekend in both the nation’s capital and Minneapolis, writing: “Thank you President Trump!”

But even as the president congratulated himself, many others found cause for condemnation.The bishop of the Episcopal Diocese of Washington said she was “outraged” by the president’s use of the historic episcopal church as a backdrop after breaking up the peaceful demonstrationThe Rev. Mariann Budde, the diocesan bishop who oversees St. John’s Church, said on ABC’s Good Morning America that the president’s photo-op was “as if it were spiritual validation and justification for a message that is antithetical to the teachings of Jesus and to the God of justice.”Trump on Tuesday morning also visited the Saint John Paul II National Shrine in Washington to lay a wreath in honor of the former Pope’s 100th birthday and later was to sign an executive order the White House said would “advance international religious freedom.”Just before he arrived, the Catholic Archbishop of Washington, Wilton D. Gregory, the nation’s most senior African American bishop, issued a blistering statement along the same lines as his Episcopal counterpart, saying the Shrine, which he does not oversee, was also being “misused” by Trump.”I find it baffling and reprehensible that any Catholic facility would allow itself to be so egregiously misused and manipulated in a fashion that violates our religious principles, which call us to defend the rights of all people even those with whom we might disagree,” Gregory said.”Saint Pope John Paul II was an ardent defender of the rights and dignity of human beings. His legacy bears vivid witness to that truth. He certainly would not condone the use of tear gas and other deterrents to silence, scatter or intimidate them for a photo opportunity in front of a place of worship and peace,” he said.House Speaker Nancy Pelosi on Tuesday also condemned the night’s event, expressing dismay that police “came out and beat” protesters to clear the way for the president.”What is that? That has no place and it’s time for us to do away with that,” said Pelosi.Noting how Trump, as he stood in front of St. John’s Church, held up a Bible, held up her own copy of the Bible in front of cameras and read several passages from the book of Ecclesiastes calling for healing.Pelosi said President Trump “has the responsibility to heal” and used the moment to highlight the stark contrast between Trump’s own words about the national protests vs what the presidents before him have said.”We would hope that the president of the United States would follow the lead of so many other presidents before him and be a healer-in-chief, and not a fanner of the flame,” Pelosi said.Copyright © 2020, ABC Audio. All rights reserved.

Mary-Kate and Ashley Olsen explain why they vanished from the public eye
Jessica Biel opens up about having “a secret COVID baby”
Seven injured in second mass shooting in Chicago in four days
Lin-Manuel Miranda apologizes for how ‘In the Heights’ “fell short” in representing Afro-Latinx community
At least two dead, two injured in early morning shooting at Alabama plant
Black teens speak out after viral video shows them being forcibly arrested