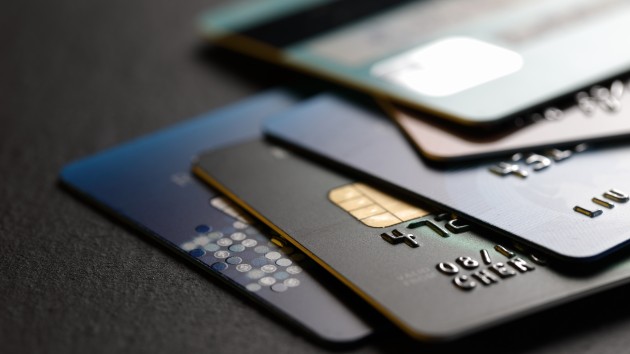 By JOEL LYONS, ABC News(NEW YORK) — If you’ve been weathering the storm of credit card debt for any period of time, you’ve probably tried the snowball method and the avalanche method.But if you’re really ready to rein in your liabilities, you may want to consider the “debt lasso method.”The tool was developed by David Auten and John Schneider, husbands who together run the Debt Free Guys blog and host the “Queer Money Podcast.””The debt lasso method is basically lassoing all your debt into as few locations as possible from wherever they are, to the lowest interest rate possible,” Schneider told ABC News’ Good Morning America.”It’s the fastest, cheapest, easiest way to pay off credit card debt, and it will actually help improve your credit score,” Auten added.The pair credit the debt lasso method with helping them win their own battle.”When David and I realized that we had $51,000 in credit card debt, we looked at the snowball method and we looked at the avalanche method, and we estimated that it was going to take about eight to 10 years with either method to pay it off,” Schneider said. “We just didn’t have the patience for that.”So the pair took a look at their entire financial situation and realized it was their credit card interest rates inhibiting them from paying off their debt.

Neither the snowball or avalanche method would directly address the hurdle of compounding interest, Schneider said. He added that maintaining high interest rates on the cards was also not in line with their goal to avoid adding to their balance or their goal of committing to paying a specific amount — ideally more than the minimum monthly payment — every single month.”Some of those rates were as high as 20% or more,” Schneider said. “So we thought, if we could remove that out of the equation, how fast could we pay off our debt? And we realized that we could actually do so within less than three years.”Below, they share the five steps they took toward becoming debt-free and how you can get started with the process (including requesting their Debt Lasso Calculator):

1. CommitFirst, be ready to take two important steps.”Commit to not acquiring any more credit card debt and also commit to paying at least a specific dollar amount on your credit card month after month,” Schneider said.

2. TrimIf you can, Schneider recommends pursuing a quick win in the beginning of the process.”The second tip is to trim,” he said. “If there is any credit card debt that you can pay off within the first month or two, do so and get that quickly out of the way.”

3. Lasso your debtNow it’s time to cowboy up.”Lasso your debt,” Auten said. “What we mean by that is take all of your credit cards and try to bring them to as few locations as possible.”For this step, Auten recommends finding a credit card with a low or no-interest rate, and then transferring balances from other cards to the new card. He adds that taking out a loan to pay off debts is another consideration.”A lot of people have asked us, is [the debt lasso method] just debt consolidation or is it just refinancing? We like to remind people that anyone can do a debt consolidation or refinancing, but it doesn’t set them up for the process of actually paying their debt off,” Auten said, pointing out how he and Schneider have seen individuals who have jumped into this part of the process without giving consideration to the four other, equally important steps within the method.”Then they give up because they think that paying off their debt isn’t going to work for them. So it’s more than just debt consolidation or refinancing,” he added.

4. AutomateInstead of relying on memory to make you payments on time, Auten recommends delegating this task to your bank.”Step No. 4 is to automate everything,” he said. “This is so you don’t miss a payment.”You’ll also be able to avoid late charges that can increase your overall balance and can raise interest rates to sky-high levels.

5. MonitorFinally, pay attention as you travel down the path toward being debt-free.”When you monitor, you actually get to see your progress, which excites you and helps you move this whole process along even faster,” Auten said.Auten says this is also the time to assess if you need to re-lasso your debt. For example, if you have obtained a 0% or low-interest balance-transfer credit card offer, you may want to set a reminder two months prior to the offer’s end date. That way, if your balance won’t be paid before it expires, you have time to start looking for a new offer and can transfer the balance ahead of accruing additional interest.Schneider says it might not make sense to implement the debt lasso method “if you can pay off your credit card debt in six months or so … without having to do a drastic overhaul of your financial situation,” but he and Auten say that no matter which process you pursue, it’s important to have a strategy.”If you’re not using a strategy … it gets very easy to not make that commitment, to skip a month or to send less each month,” Auten said. “It’s the commitment that really makes all of these methods work.”Copyright © 2020, ABC Audio. All rights reserved.

7 charged in trafficking ring that sent thousands of flying squirrels from Florida to Asia, officials say
Victims set to testify against alleged NorCal serial rapist at trial this week
How FBI says Michigan gov kidnapping plot went from texts, small gatherings to raid
Snow and fire from California to Wisconsin, Tropical Storm Epsilon stays out at sea
Charlize Theron and Gabrielle Union honor Regina King for “changing the world” with her “once-in-a-lifetime talent”
Rumer Willis reveals she lost her virginity to a man that “took advantage” of her