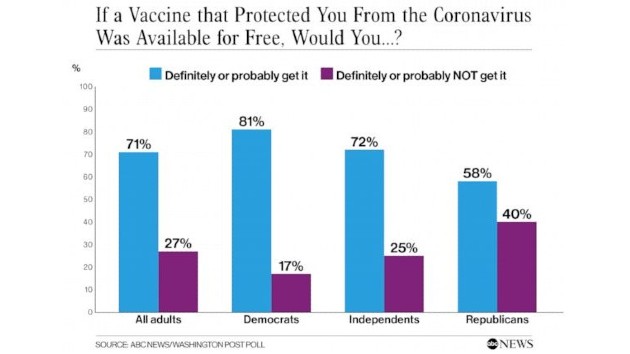 By STEVEN SPARKS and GARY LANGER

(NEW YORK) — Unpersuaded by more than 100,000 pandemic deaths in the United States, 45% of strong conservatives, four in 10 Republicans and nearly as many evangelical Christians say they’d be unlikely to get vaccinated against the coronavirus, even for free.Overall, 27% of adults in an ABC News/Washington Post poll say they definitely (15%) or probably (12%) would not get the vaccine. Among them, half say they don’t trust vaccines in general, while nearly a quarter don’t think it’s needed in this case.

A plurality definitely would get vaccinated (43%) and 28% say they probably would. The net, 71%, is much higher than the adult vaccination rate for the standard seasonal flu — 45% in the 2018-19 flu season, according to the U.S. Centers for Disease Control and Prevention (with a wide range by state, from 34 to 56%). It’s much lower than the 2017 child vaccination rates for polio and measles/mumps/rubella, 93% and 92%, respectively.A mix of groups express less interest in getting vaccinated — 46% of Republican women, 45% (as noted) very conservative Americans, 40% of Republicans and 37% of evangelical Christians.Across the spectrum, 90% of Democratic men say they definitely or probably would get the vaccine, as would 81% of Democrats overall, and as many liberals in this poll, produced for ABC by Langer Research Associates.Interest is higher, although not overwhelmingly high, among seniors — 77% — compared with all other adults, 69%.The overall result is similar to other recent surveys (by Fox News, ABC/Ipsos, Pew Research and CNN) in which 23 to 33% of adults have said they would not get vaccinated or would not be likely to. By contrast, in a November 2009 ABC/Post survey, many more said they likely would not get vaccinated against the swine flu, 66%. Copyright © 2020, ABC Audio. All rights reserved.