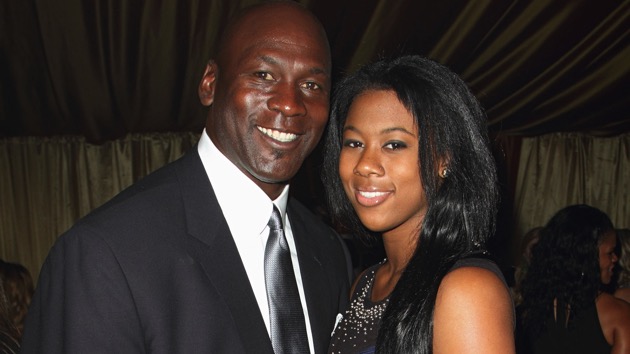 By CANDICE WILLIAMS(NEW YORK) — Michael Jordan’s daughter, Jasmine, is opening up about her famous father’s “rambunctious” side that many fans never get to see.In a recent interview with ABC Audio, the 27-year-old said that for those hoping to catch her father on social media, don’t hold your breath.”My father is so — not anti-social media, but anti-social media,” she shared with a laugh. “I can never imagine him being on Twitter. I can’t imagine him on IG or anything like that.”While social media may not be the way for fans see Michael Jordan let loose, Jordan promised he does have an outlet where he opens up.”When you get him in his natural element of just being that fun and rambunctious dad, it’s with music,” she revealed. “He loves music.””And it can be rap,” she continued. “It can be R&B. It can be hip-hop, whatever. He has no limit on the boundaries and categories of music that he listens to. That’s really when you get to see that fun side of him.”So, what does Michael Jordan actually listen to? According to Jordan, it ranges from Future to “throwing it back” with Anita Baker.”There’s just a plethora of options,” she said.Jordan said her father is also big on getting music before it officially hits the masses.”I remember when I was younger, he used to always get everyone CDs before they came out,” she said. “I never understood why. Like, why are you listening to Johnny Gill’s album before anybody has it? It was mind-boggling.”Of course, now it all makes sense.”Music is just another aspect that truly allows him to be himself and connect and really just have fun and let his hair down. Or lack thereof,” she quipped. “But we love music together.” Copyright © 2020, ABC Audio. All rights reserved.

Shia LaBeouf got a real, massive tattoo for his role in ‘The Tax Collector’
Ricky Gervais slams Kardashians for “embarrassing” sponsored tweets, then raises money with one of his own
After COVID-19 delays, CBS says newly-shot episodes of ‘The Bold and The Beautiful’ coming July 20
Olympic star Adam Rippon joins ‘What Would You Do?’ scenario about coming out
Gyms stay open as COVID-19 cases rise: What to know about safety
How to negotiate the cost of college: expert tips