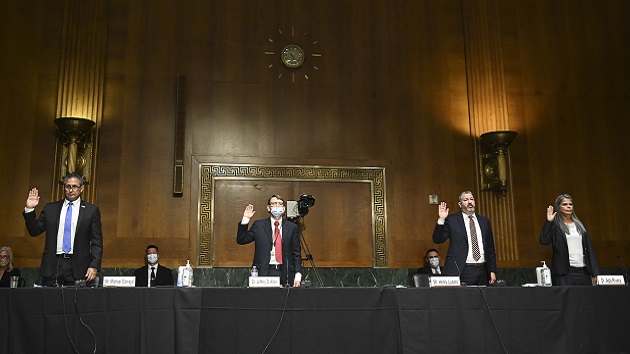 By QUINN OWEN, ABC NEWS(WASHINGTON) — A doctor contracted by the Department of Homeland Security to advise on detention health conditions appeared before Congress on Tuesday to personally criticize the Trump administration as COVID-19 continues to spread through civil immigration detention centers.Dr. Scott Allen, an independent health expert and medical school professor, told lawmakers that the novel coronavirus’ persistence in Immigration and Customs Enforcement facilities was in part due to “some gaping holes” in Centers for Disease Control and Prevention guidelines.”And the fact is — in the real world — use of those guidelines has been associated with failure,” Allen told members of the Senate Judiciary Committee.He said the CDC has not underscored the importance of reducing the detained population and its guidance on testing remains insufficient.”I think we’re underutilizing some of our best tools,” he said. “We need to get more aggressive with our testing strategies.”ICE officials have repeatedly noted their reliance on CDC guidelines in the face of pressure to reduce its jailed population.“ICE continues to re-evaluate all individuals in their custody who make up vulnerable populations and they’ve been modifying their practices based on recommendations from the CDC,” acting Deputy DHS Secretary Ken Cuccinelli told reporters in April.MORE: New allegations pressure ICE to release immigrant detaineesDana Gold, a senior attorney with the whistleblower rights group Government Accountability Project, represented Allen and specified that the doctor was not speaking on behalf of DHS.Allen has repeatedly voiced personal criticism of immigration detention conditions with legal assistance by the group that represents and advises whistleblowers to help shield them from retaliation. He first raised alarms about the threat of COVID-19 in a March letter to Congress.”Now the flames are growing,” he wrote in testimony submitted to the committee Tuesday.Recent projections from a study in the Journal of Urban Health, which looked at 111 ICE detention facilities, show coronavirus outbreaks can potentially spread to nearly every detainee and overwhelm local hospitals. Two detainees have died in ICE custody after contracting the disease.More than a quarter of detainees tested by ICE came back positive and are currently monitored or isolated, according to the agency. Out of the nearly 26,000 people held by ICE on an average day in recent months, at least 900 deemed to be at high risk of infection have been released.The number of people held in ICE detention has dropped by half since 2019, driven largely by a decline in unauthorized crossings at the southern border and the implementation of new rapid removal protocols by Border Patrol. Deportations and other administrative removals by ICE also have not stopped.Earlier in Tuesday’s Senate hearing, the head of ICE deportation operations said the agency does not test immigrant detainees before removing them unless they show COVID-19 symptoms or a prior agreement with the receiving country exists.”We’re not aware of any positive cases that were showing symptoms or known to be positive that have been deported,” said Henry Lucero, the head of ICE Enforcement and Removal Operations. “We’re trying to do more testing of these individuals at removal.”Novel coronavirus infections in people who do not show symptoms while still contagious are a major challenge to stemming the spread of disease, according to the CDC.The chief public health official of Guatemala — one of the Central American countries which has urged a halt on removals — suggested in April that U.S. officials allowed infected patients to be deported.”We automatically evaluate them here and test them and many of them have come back positive,” Public Health Minister Hugo Monroy said at the time.Lucero could not immediately provide the number of countries that had testing agreements with ICE. He also said the agency has detained some inmates as transfers from state and local correctional facilities despite knowing they had COVID-19.A lawyer arguing on behalf of ICE before a federal court in Florida said asymptomatic detainees were not tested for COVID-19 before being transferred to another holding center, The Miami Herald reported last week.Judges across the country have ordered the release of nearly 400 as the cries for relief continue. Detainees have launched legal challenges, pleading for the alternatives ICE uses in certain cases.One barrier for some immigrant detainees is the inability to pay bonds even if they qualify for parole release. A federal judge ruled last week that immigration authorities in Maryland must consider a detainee’s ability to pay when setting bond amounts.”The constitutional problems with the immigration court’s bond procedures made it almost guaranteed that an immigrant would have to sit in jail, without the government having to prove why they should not have their freedom,” said Nick Taichi Steiner, staff attorney at the ACLU of Maryland.Copyright © 2020, ABC Audio. All rights reserved.