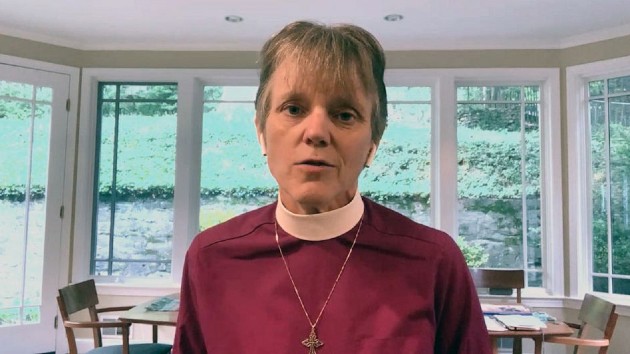 By MORGAN WINSOR, ABC News(NEW YORK) — Bishop Mariann Edgar Budde of the Episcopal Diocese of Washington said she had no idea President Donald Trump was going to visit her church as protesters flooded the U.S. capital on Monday evening. “I was sitting watching the news with my mother when I saw what everyone else saw,” Budde told ABC News chief anchor George Stephanopoulos in an interview Tuesday on Good Morning America.What she saw was Trump and his entourage walking across Lafayette Square to St. John’s Episcopal Church, just moments after police fired tear gas and rubber bullets to urgently disperse the peaceful protesters gathered outside the White House gates. “We have the greatest country in the world,” Trump said in front of the church, holding up a Bible for the cameras, minutes before returning inside the White House.Every sitting U.S. president since James Madison has attended a service at St. John’s Episcopal Church, which was partially burned amid protests on Sunday evening. But sources told ABC News that Trump was, in part, motivated to go there for the photo-op to counter reports that he had been in the White House’s underground bunker during Friday night’s protests. Prior to walking over to the historic church, Trump delivered an address from the Rose Garden of the White House in which he declared himself “your president of law and order” and he vowed “to uphold the laws of our nation.” The president called on governors to deploy the U.S. National Guard to quell protests that have erupted in states from coast to coast following the death of George Floyd, an unarmed black man who died on May 25 in Minneapolis shortly after a white police officer was filmed kneeling on his neck for nearly nine minutes as three other officers stood by. “If a city or state refuses to take the action that is are necessary to defend the life and property of their residents, then I will deploy the United States military and quickly solve the problem for them,” Trump said during his address.But to do that, Trump would have to invoke the Insurrection Act of 1807, a law that hasn’t been enacted since the Rodney King riots in Los Angeles in 1992. In Washington, D.C., where the president has jurisdiction, Trump said he has already dispatched “thousands and thousands of heavily armed soldiers, military personnel and law enforcement officers to stop the rioting, looting, vandalism, assaults and the wanton destruction of property.”Budde, the diocesan bishop who oversees St. John’s Episcopal Church, said on GMA that the president’s photo-op was “as if it were spiritual validation and justification for a message that is antithetical to the teachings of Jesus and to the God of justice.” “This is an excruciating moment a crisis moment in our country where we need healing, where we need reconciliation and we need justice,” Budde said.The bishop added that Trump is still welcome at the church “as anyone is welcome to pray.” “The presidents are welcome as citizens of this country to pray alongside fellow citizens to kneel before God in humility and to rededicate themselves to the task to which they’ve been elected,” she said. “In that posture, he and any president is welcome. But he is not entitled to use the spiritual symbolism of our sacred spaces and our sacred texts to promote or to justify an entirely different message.”When asked what she would say if she had a chance to preach to Trump from the pulpit, Budde said, “I would give him the same message I would give to all of us.” “That we have to look deep, we have to go to the root causes of the pain that we are witnessing,” she said. “We have to keep our focus on the sacredness of every human life and the outrage and anguish that we are hearing from so many of our nation’s young people and people of color, and we need to align ourselves, all of us, with the God of unconditional love and justice.”