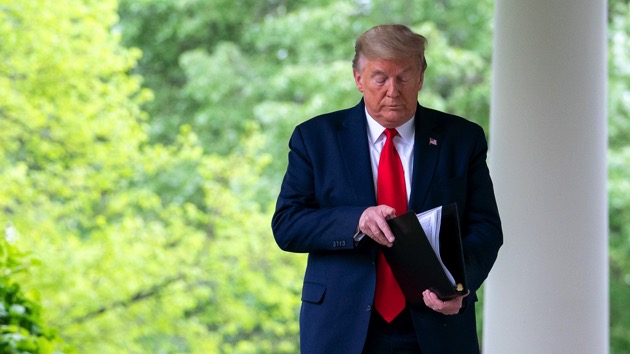 By KATHERINE FAULDERS, JUSTIN FISHEL and ALEXANDER MALLIN, ABC News(WASHINGTON) — In a call with the nation’s governors Monday, an angry President Donald Trump told state leaders they must “dominate” out-of-control protests, calling on law enforcement to get “much tougher” and blaming unrest erupting across many communities squarely on “the radical left.”The president and Attorney General William Barr used the word “dominate” nearly a dozen times in describing how law enforcement should posture themselves.”You have to dominate, if you don’t dominate you’re wasting your time,” Trump said, according to a recording of the call obtained by ABC News. “They’re gonna run over you, you’re gonna look like a bunch of jerks. You have to dominate.””You have to know what you’re dealing with,” the president told the nation’s governors. “And it’s happened before, this happened numerous times and the only time it’s successful is when you’re weak and most of you are weak.”Trump said they were making a mistake by letting looters destroy property and called for arresting and prosecuting those captured on camera, saying they should be put in jail for 10 years.”Law enforcement response is not gonna work unless we dominate the streets, as the president said, we have to control the streets,” Barr added in his own set of remarks. “We have to control the crowds and not to react to what’s happening on the street and that requires a strong presence.”The president said many governors were slow to call on the National Guard.”Why you’re not calling them up I don’t know — but you making a mistake and making yourselves look like fools.””These are terrorists,” President Trump said of the protesters. “Antifa and the radical left.”In his opening remarks, he made no mention of George Floyd, the African American man killed in police custody last week in Minneapolis, and did not address the protesters concerns about racial inequality.While many of the governors on the call avoided directly criticizing the president over his response to the protests, Illinois Democratic Gov. J.B. Pritzker confronted Trump over his recent rhetoric, saying he was in many cases making the situation “worse.””I’ve been extraordinarily concerned about the rhetoric that’s been used by you,” Pritzker said. “It’s been inflammatory and it’s not okay for that officer to choke George Floyd to death, but we have to call for calm. We have to have police reform called for.”Pritzker added, “the rhetoric that’s coming out of the White House is making it worse. People are feeling real pain out there. And we’ve got to have national leadership in calling for calm and making sure that we’re addressing the concerns of the legitimate peaceful protesters. That will help us to bring order.”Trump shot back, defending his comments made thus far about Floyd and attacking Pritzker over his response to the spread of coronavirus in Illinois.”I don’t like your rhetoric much either because I watched it with respect to the coronavirus and I don’t like your rhetoric much either,” Trump said. “I think you could have done a much better job, frankly, but that’s okay we know we don’t agree with each other.” Copyright © 2020, ABC Audio. All rights reserved.