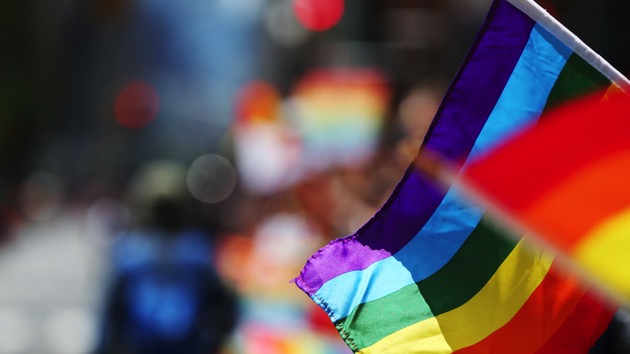 By TONY MORRISON, ABC News(NEW YORK) — In a largely unprecedented move during an extraordinary time in our nation’s history, more than 100 LGBQT+ organizations have united in solidarity to combat racial violence and injustice as Pride Month gets under way.Calling out history, that it was LGBQT+ individuals of color who essentially sparked the gay liberation movement in the 1960s, leaders from many of America’s most prominent LGBTQ+ and civil rights groups banned together to say, “We understand what it means to rise up and push back against a culture that tells us we are less than, that our lives don’t matter.”Amid what is typically a time to celebrate the accomplishments and progress of people who identify as lesbian, gay, bi-sexual, queer, trans and more in our country, the community has fully mobilized to support the real-time efforts of the Black Lives Matter movement and to amplify the voices of protestors marching after the death of George Floyd.While condemning racism, racial violence and police brutality, “The LGBTQ community knows about the work of resisting police brutality and violence,” the open letter reads.Sarah Kate Ellis, president of LGBTQ+ advocacy group GLAAD, told GMA, “It is all of our responsibility to speak out publicly against racism, systemic injustice, and police brutality, and to elevate voices and amplify stories of people of color, especially with the LGBTQ community.”“We know that social change is often built on the pain and outrage of moments like the ones we are seeing in America today,” she said. “It is important to remember that the revolutionary riots at Stonewall in 1969 were spearheaded by many LGBTQ people of color, and that none of the progress made for the acceptance and equality of LGBTQ people over the past 51 years would be possible if not for the action and courage of those protestors,” Ellis added.Ellis went on to tell GMA how this Pride Month will undoubtedly be completely different: “We’ll be centering and lifting up the voices of queer people of color, whose struggles are shared by the entire LGBTQ community. There can be no pride if it is not intersectional. We are, Together in Pride.”The Human Rights Campaign (HRC), who coordinated the open letter, echoed GLAAD and told GMA, “Pride Month reminds us of our roots in struggle.”“We honor the uprisings against police brutality at Stonewall and elsewhere,” said HRC president Alphonso David. “And we celebrate the fact that today many more of us may live as our true selves in the open.”

.@HRC and more than 100 LGBTQ organizations are joining together to send a clear message and take action against systemic violence, racism and police brutality faced by the Black community. #BlackLivesMatter https://t.co/UJPNG4ZiCS

“This year, as righteous protesters march the streets across America to affirm that black lives matter, the LGBTQ community joins with them in combating racism,” David said.On the matter of LGBTQ+ youth of color affected with events of current day, Amit Paley, CEO and executive director of The Trevor Project, calls out America’s young people as particularly vulnerable during this time of social and racial unrest. “We know from our research that black LGBTQ youth experience rates of depressed mood and suicidality similar to all LGBTQ youth however, despite having similar rates of mental health disparities, black LGBTQ youth are significantly less likely to receive professional care,” Paley told GMA.

The senseless & unjust killings of Black Americans must stop. This racial violence is causing fear, pain, & anger among so many, including LGBTQ youth of color. @TrevorProject wants you to know that we see you & are here for you 24/7. https://t.co/vBSIuJPg1A