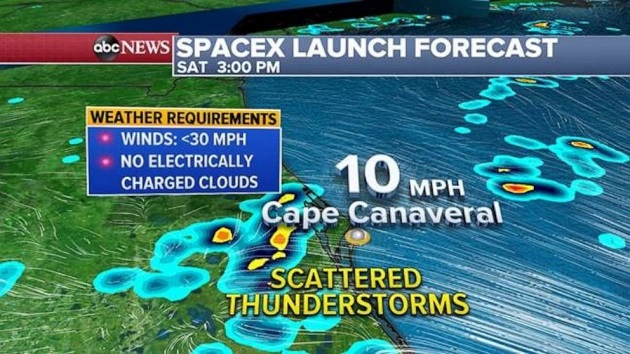 (CAPE CANAVERAL, Fla.) — Weather again could throw a wrench in the planned launch for NASA’s SpaceX mission to the International Space Station Saturday afternoon.The forecast for NASA’s SpaceX launch in Cape Canaveral Saturday, unfortunately, calls for scattered thunderstorms, including lightning. While the forecast is not looking as poor as this past Wednesday’s forecast, which forced NASA to scrub the launch, it isn’t looking significantly better either.Wednesday’s launch was called off less than 20 minutes before its scheduled liftoff from the Kennedy Space Center in Florida due to inclement weather.The SpaceX Demo-2 launch will send NASA astronauts Robert Behnken and Douglas Hurley to the ISS on a Crew Dragon spacecraft propelled by a Falcon 9 rocket.Saturday’s launch is currently set for 3:22 p.m. ET.In the Northeast Saturday, much of the region will see a very nice day ahead with temperatures warming into the 70s and some low 80s with dew points becoming increasingly lower through the day. Additionally, clouds will clear out of much of the region during the afternoon, so plenty of sunshine is in the forecast.For much of the west, a storm moving into the region Saturday. The location of the low-pressure system, clearly visible on a satellite Saturday morning off the coast of California, is a little atypical for late May. It more resembles something we would see in the middle of the winter or early spring.The storm will bring some rain into parts of northern California Saturday, which would be welcomed since much of the northern half of California and nearly all of Oregon are in some type of drought condition. Additionally, parts of this region also received a significant heatwave earlier this week. There could be a couple of pockets of flooding with the storm Saturday.The storm will also kick up some winds and as it moves inland, where there looks to be a chance for dry, gusty winds over parts of the desert of Nevada and Utah. There is a fire danger in that region Saturday.As the storm moves into the Northwest, it will likely bring a chance for a couple of severe storms in Oregon and Washington, with gusty, damaging winds the main threat.The storm clears out on Sunday, with cooler weather dominating much of the region in the next couple of days.Meanwhile, in the Atlantic, a cluster of storms well east of the U.S. coastline and well north of the Caribbean is being monitored for tropical development. Right now, there is a 60% chance it will develop in the next five days. Monday is the first official day of the 2020 Atlantic Hurricane season and there have already had two named storms.In the Pacific, a cluster of storms near Guatemala is being monitored for development, with a 70% chance of development in the next five days.Copyright © 2020, ABC Audio. All rights reserved