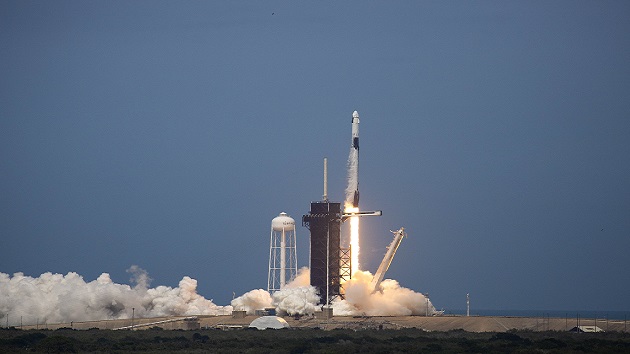 Saul Martinez/Getty Images
Posted on May 30, 2020 by ABC News

(CAPE CANAVERAL, Fla.) — NASA and SpaceX made history Saturday as they successfully launched astronauts toward the International Space Station.The SpaceX Demo-2 launch originally was scheduled for Wednesday, but it was called off less than 20 minutes before liftoff due to inclement weather.3:48 p.m.: ‘So proud’: Jim Bridenstine reacts to launchJim Bridenstine, NASA administrator, said he was “so proud” after the successful launch.”For the first time in nine years, we have now launched American astronauts on American rockets from American soil. I’m so proud of the @NASA and @SpaceX team for making this moment possible,” Bridenstine tweeted.

For the first time in 9 years, we have now launched American astronauts on American rockets from American soil. I’m so proud of the @NASA and @SpaceX team for making this moment possible. #LaunchAmerica https://t.co/XiqPAj6Saa

3:46 p.m.: Falcon 9 has landedThe Falcon 9 booster has landed, making it the first Falcon 9 to carry humans to orbit, according to NASA.The Dragon is now officially making its way to the International Space Station, NASA said.3:31 p.m.: Stage 2 propulsion ‘still good’The astronauts are now in Stage 2 of the launch and the propulsion was “still good,” NASA said.3:22: Successful liftoff for NASA astronauts aboard SpaceX Dragon

The SpaceX Demo-2 successfully launched NASA astronauts Robert Behnken and Douglas Hurley, and is making its way to the International Space Station.It’s a nine-minute ride to reach orbit, and then a 19-hour ride after that, NASA said.The good news comes after Wednesday’s launch was scrubbed.”It is absolutely our honor to be part of this huge effort to get the United States back in the launch business. We’ll talk to you from orbit,” Hurley said minutes before launch.2:30 p.m.: Crew and weather ‘go’ for launchBoth the crew and weather are “go” for launch, according to NASA.Fuel is now being loaded into the spacecraft with less than an hour to launch time.NASA said that liquid oxygen and RP-1, typically referred to as rocket fuel, will fill the Falcon 9 until about two minutes before liftoff.The news of a “go” for weather is a welcome development after the conditions were touch-and-go throughout the morning.1:47 p.m.: Weather not cooperatingThe launch has not been scrubbed, but there is a no-go because of weather right now.NASA and Space X are waiting to see if conditions improve.1:25 p.m.: Hatch closed, crew ‘settled in’The hatch is closed and astronauts Doug Hurley and Bob Behnken are “settled in” ahead of the SpaceX Demo-2 liftoff, according to NASA.SpaceX confirmed Saturday morning that its launch is going ahead as planned

“All systems go for Crew Dragon’s test flight with @NASA astronauts @AstroBehnken and @Astro_Doug,” the company tweet. “Teams are keeping an eye on weather.”SpaceX CEO Elon Must echoed the weather concern, tweeting “Proceeding with countdown today, weather cancellation risk ~50%.”If all goes well Saturday, it will be the first time Musk’s private space firm, SpaceX, will launch a human crew. It will also mark the first time in nearly a decade the U.S. has launched American astronauts from U.S. soil, ending an expensive reliance on Russia for seats to space.”We’re at the dawn of a new age, and we’re really leading the beginning of a space revolution,” NASA Deputy Administrator James Morhard said at a news conference Friday.He said the aim for the launch is to “give hope for many people who need it right now, and also to unite our country and the world.”You can learn more about the NASA astronauts, Doug Hurley and Bob Behnken, who are headed to the ISS, here.’50-50 chance’: Weather forecast includes possible thunderstorms, showersThe weather forecast for Cape Canaveral, Florida, at the time of the launch includes scattered showers and thunderstorms.”It sounds like we got a 50-50 chance with the weather again,” Bob Cabana, the director of the Kennedy Space Center, said in a news conference Friday.NASA Administrator Jim Bridenstine added that despite all the VIP’s coming to watch the launch, including President Donald Trump, and the national hype they will feel “no pressure” and “we will launch when we are ready,” emphasizing the safety of Behnken and Hurley as a top priority.According to the Launch Mission Executive Forecast, there is a 50% probability of violating weather constraints. Meanwhile, there is a 40% of probability of violating weather constraints on the backup launch date of Sunday.