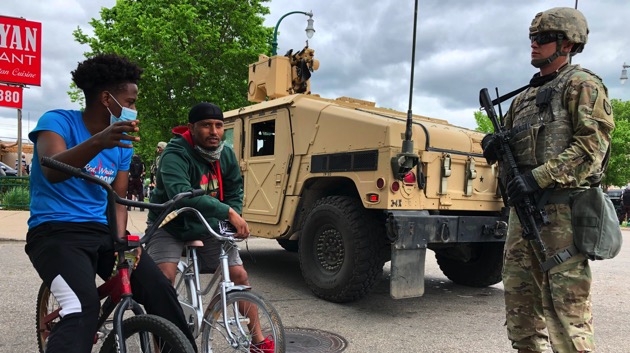 KEREM YUCEL/AFP via Getty Images
Posted on May 29, 2020 by ABC News

By LUIS MARTINEZ, ELIZABETH MCLAUGHLIN and  MATT SEYLER, ABC News(MINNEAPOLIS) — Images of armed Minnesota National Guardsmen on the streets of Minneapolis and President Trump’s controversial tweet suggesting a further military role have raised questions about what Guardsmen can do to control the violence in Minneapolis and whether the active duty military has any role at all.On Thursday, Gov. Tim Walz activated 500 Minnesota National Guardsmen to provide support to local law enforcement in Minneapolis.While the Guardsmen are armed and equipped in camouflage uniforms, they are only in a support role to local law enforcement. At a Friday news conference, Walz repeatedly emphasized that the National Guard “is not a police force.”Gen. Jon Jensen, the adjutant general of the Minnesota National Guard, said at the same news conference that his Guardsmen were armed because of intelligence from the FBI that indicated “a credible threat” to his force.Jensen said Walz authorized his recommendation that the Guardsmen be armed as they deployed Thursday night. He declined to disclose what rules of engagement the Guardsmen were operating under, but noted that they retained the right of self-defense.He also said that the Guardsmen do not have the authority to carry out arrests; they are accompanied by law enforcement personnel who can carry out that arrest.

Law enforcement uniforms can be hard to tell apart. Not everyone you see in camouflage is part of the @MNNationalGuard. Our Guardsmen have @USArmy and @usairforce patches and wear U.S. flags on their sleeves to identify them. We live in your communities and we are here to help. pic.twitter.com/sDPmCJFzfc

Jensen said his Guardsmen had four missions: to protect the state capitol building, to provide security at the Ramsey County Law Enforcement Center, to provide security at the Bureau of Criminal Apprehension and to escort fire department personnel into “unsecure” and “dangerous” areas.In a statement provided to ABC News, the Minnesota National Guard said they are also “forming lines between protestors and sites that are at risk of being harmed.””We’re not authorized to disclose any specifics about our tactics or use of force,” said the statement. “The Guardsmen are activated to protect life, preserve property and to ensure the right of people to peacefully demonstrate in Minneapolis and its surrounding communities.”Jensen said the security missions at the buildings freed up local law enforcement to be available to respond to any potential disturbances.Overnight, President Trump’s tweets added to the confusion about the military’s role. “Just spoke to Governor Tim Walz and told him that the Military is with him all the way. Any difficulty and we will assume control but, when the looting starts, the shooting starts,” Trump said in tweets that Twitter later flagged as violating the social media platform’s rules about glorifying violence.Each state and territory in the United States has a National Guard that is under the direct control of a state’s governor. They can be federalized for national missions, but that is not the same as the president’s taking over a state’s guard.Active duty military refers to professional military service members who perform their job as a full-time job. National Guardsmen are part of the military but are civilians who after their initial professional training continue to regularly train in uniform several times a month.Under the post-Civil War law known as Posse Comitatus, the U.S. active duty military is forbidden from carrying out law enforcement duties. That ban can only be waived if a President declares a national emergency.State National Guards can carry out a variety of duties in response to natural disasters and times of crisis, and that can include crowd control. They can also be armed for specific missions but can use their weapons in self-defense, just like all military personnel.National Guardsmen are trained in crowd control techniques and use visored helmets, shields, batons — techniques designed to minimize any escalations in violence.The 1970 Kent State University shootings, when four students were killed and nine others were wounded from fire by the Ohio National Guard, continues to haunt the national consciousness.That shooting highlighted how Guard commanders employed combat techniques for a civilian crowd control event. The deadly shootings spurred reforms that led to the development of less lethal crowd control tactics and training designed to de-escalate tensions by law enforcement agencies.That training continues, but local law enforcement has also moved toward employing paramilitary gear and equipment in preparation for violent protests, particularly by SWAT tactical teams that sometimes wear camouflage uniforms and use armored vehicles that can be used in different scenarios.Reinforcing that was a Tweet on Friday from the Minnesota National Guard that pointed out that not everyone on the streets of Minneapolis who is wearing a camouflage uniform is a National Guardsman.“Law enforcement uniforms can be hard to tell apart. Not everyone you see in camouflage is part of the @MNNationalGuardm,” said the tweet. “Our Guardsmen have @USArmy and @usairforce patches and wear U.S. flags on their sleeves to identify them. We live in your communities and we are here to help.” Copyright © 2020, ABC Audio. All rights reserved.