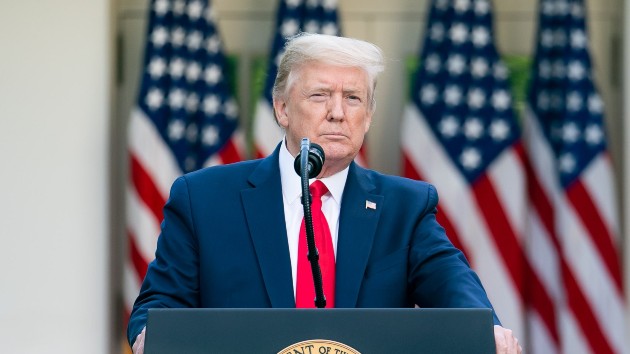 Official White House Photo by Tia Dufour
Posted on May 29, 2020 by ABC News

By WILLIAM MANSELL and LIBBY CATHEY, ABC News(WASHINGTON) — Twitter has flagged a tweet from the official White House Twitter account which reposted the text of a tweet President Donald Trump sent early Friday morning, saying “when the looting starts, the shooting starts,” claiming the tweets violated its rules about “glorifying violence.”The tweets were in reference to the ongoing unrest in Minneapolis following the death of George Floyd.”These THUGS are dishonoring the memory of George Floyd, and I won’t let that happen. Just spoke to Governor Tim Walz and told him that the Military is with him all the way. Any difficulty and we will assume control but, when the looting starts, the shooting starts. Thank you!” Trump tweeted shortly before 1 a.m. Friday.The official White House account reposted the language of President Trump’s tweet Friday morning, which had already been flagged by Twitter.The tweets are now only visible if “view” is clicked.”This Tweet violated the Twitter Rules about glorifying violence. However, Twitter has determined that it may be in the public’s interest for the Tweet to remain accessible,” the social media company said.Replying to its own flagged tweet which repeated the text of Trump’s flagged message, the official White House Twitter account later argued that Trump was actually condemning violence.

The President did not glorify violence. He clearly condemned it.@Jack and Twitter's biased, bad-faith "fact-checkers" have made it clear: Twitter is a publisher, not a platform. https://t.co/lTm3Pxxaqg

Without addressing the Twitter guidelines that got his tweet flagged earlier Friday morning, Trump responded to Twitter saying the social media giant only targets Republicans.”Twitter is doing nothing about all of the lies & propaganda being put out by China or the Radical Left Democrat Party,” Trump tweeted. “They have targeted Republicans, Conservatives & the President of the United States. Section 230 should be revoked by Congress. Until then, it will be regulated.”After protesters overtook the Minneapolis Police Department’s Third Precinct and set it on fire, Trump lashed out at local officials and said the military could take over the response to the protests.”I can’t stand back & watch this happen to a great American City, Minneapolis. A total lack of leadership,” Trump tweeted. “Either the very weak Radical Left Mayor, Jacob Frey, get his act together and bring the City under control, or I will send in the National Guard & get the job done right.”Frey responded to Trump at an early-morning press conference Friday, saying that type of finger point is weak.”Weakness is refusing to take responsibility for your actions. Weakness is pointing your finger at somebody else during a time of crisis,” Frey said. “Donald Trump knows nothing about the strength of Minneapolis. We are strong as hell. Is this a difficult time period? Yes. But you better be damn sure that we’re gonna get through this.”First Lady Melania Trump also chimed in on the protests on Twitter, saying, “there is no reason for violence” and the country needs to focus on healing. She noted in the tweet how she’s seen Americans come together in the face of the coronavirus pandemic.

Our country allows for peaceful protests, but there is no reason for violence. I’ve seen our citizens unify & take care of one another through COVID19 & we can’t stop now. My deepest condolences to the family of George Floyd. As a nation, let's focus on peace, prayers & healing.

Floyd, who is black, was seen pinned down in a video by a white police officer and later died. He could be heard screaming, “I can’t breathe,” on the video of the incident.The video of Floyd’s death has now caused outrage in the city of Minneapolis and all over the country. Residents of the city have protested his death since Tuesday.This is the second time this week Twitter has taken action against Trump’s tweets.It previously flagged two of Trump’s tweets about mail-in voting in California, saying Trump’s tweets were “potentially misleading” about elections.Trump responded to the flags by issuing an executive order Thursday targeting social media companies.He said the order allows for new regulations so that social media companies “that engage in censoring or any political conduct will not be able to keep their liability shield.”

John McClane is back in new Die Hard…battery commercial?
Trump dismisses pandemic, rips Fauci as ‘disaster’ in campaign all-staff call
Attorney charged in Jennifer Dulos murder conspiracy freed to visit sick dad
Election 2020 live updates: Early voting starts in battleground Florida
Election 2020: Why voting in the coronavirus pandemic will be unlike any other year
Michael B. Jordan is helping expand a “new universe” for Black superheroes