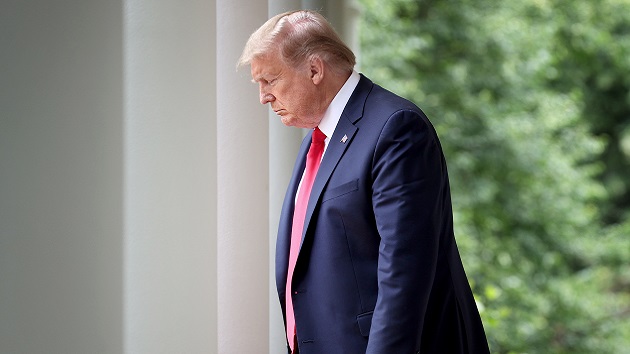 By OLIVIA EUBANKS, ABC NEWS(WASHINGTON) — As protests over the death of a black man in police custody spread nationwide, President Donald Trump tweeted a phrase that echoed controversial remarks from a past era.”Just spoke to Governor Tim Walz and told him that the Military is with him all the way,” the president tweeted Friday morning, referencing protests that turned violent over the death of George Floyd in Minneapolis. “Any difficulty and we will assume control but, when the looting starts, the shooting starts.”Trump later doubled down, tweeting “Looting leads to shooting, and that’s why a man was shot and killed in Minneapolis on Wednesday night – or look at what just happened in Louisville with 7 people shot. I don’t want this to happen, and that’s what the expression put out last night means…. “In 1967, Walter Headley, who was then the police chief of Miami, used the phrase “when the looting starts, the shooting starts” at a press conference while addressing his department’s crackdown on “hoodlums.” He said Miami hadn’t “faced serious problems with civil uprisings and looting because I’ve let the word filter down that when the looting starts, the shooting starts,” according to the Miami Herald. “We don’t mind being accused of police brutality,” Headley added.Headley was known for cracking down on communities of color with policing policies like stop-and-frisk and his use of patrol dogs.During the Republican National Convention in Miami Beach in August 1968, violent protests broke out in the predominantly black neighborhood Liberty City. According to The New York Times, Headley repeated the phrase again.Trump’s tweet — which also referred to protesters as “thugs” — was quickly flagged by Twitter as “glorifying violence.” The White House subsequently tweeted the same language on Friday morning, which was also flagged by the platform.The president has repeatedly used the word “thug,” which carries its own racial context.In 2016, in response to the cancelation of his presidential rally in Chicago, he tweeted: “The organized group of people, many of them thugs, who shut down our First Amendment rights in Chicago, have totally energized America!”He addressed the word’s connotations in an April 2015 tweet after then-President Barack Obama faced criticism for using it, writing, “They now say using the word ‘thug’ is, like so many other words, not politically correct (even though Obama uses it). It is racist. BULL!”In an interview with NPR on the use of the word “thug” to describe Baltimore rioters after Freddie Gray’s funeral, John McWhorter, associate professor of English and comparative literature at Columbia University, said that “thug” is a polite way of using the “N-word.””It is a sly way of saying there go those black people ruining things again. And so anybody who wonders whether thug is becoming the new N-word doesn’t need to. It’s most certainly is,” he said.He made the case that when African Americans use the word, it takes on a different meaning.”When black people say it, they don’t mean what white people mean, and that’s why I think Stephanie Rawlings-Blake and Barack Obama saying it means something different from the white housewife wherever who says it,” he said.Copyright © 2020, ABC Audio. All rights reserved