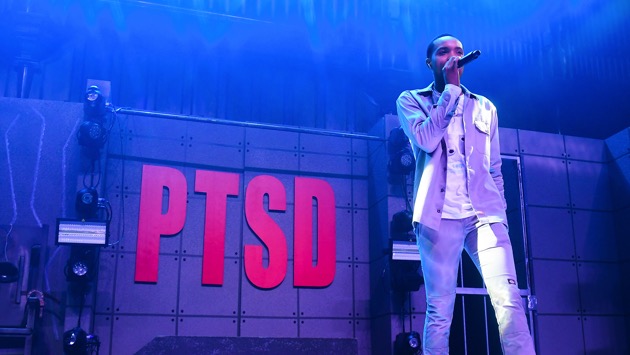 Prince Williams/Wireimage
Posted on May 29, 2020 by ABC News

By DEENA ZARU, ABC News(CHICAGO) — By the time he was in the sixth grade, G Herbo had already started losing friends to gun violence and according to the Chicago rapper, for communities that deal with the brunt of the violence, the city has become a “mental illness war zone.”The 24 year-old hip-hop artist, whose full name is Herbert Randall Wright III, has lost dozens of friends to gun violence and has reflected on the pain and loss in his music over the years. In his latest album “PTSD,” which was rereleased Friday with a cover to mark Mental Health Awareness Month, the rapper reflects on his own struggles with post-traumatic stress disorder — a condition he realized he was dealing with after seeing a therapist about two years ago.

TUNE IN IF YOU EXCITED WE LISTENING EARLY IN THE APP 👉 https://t.co/hStOucmVtu#PTSDDELUXE pic.twitter.com/Ssmqz14bJI

“The album being called PTSD is because I walk around everything with post traumatic stress disorder. I come from the streets, I come from not knowing if you’re going to make it home and being okay with it,” G Herbo told ABC News, adding that the majority of people in his community who experience gun violence “are walking around with this illness” and “we don’t we don’t even realize it.”Karen Sheehan, the medical director of Strengthening Chicago’s Youth which seeks a public health approach to addressing gun violence, told ABC News that “social isolation” in a segregated city has led to the “normalization of violence” and the trauma it causes.“We often talk about PTSD that you’ve had this one bad experience and it’s hard to recover. The problem is it’s never relenting, it’s gone on for generations. That’s more challenging because there isn’t a place for safety to come home,” Sheehan said.“… For our poor young people and families in Chicago there isn’t any time you can ever escape. I can’t imagine how that unrelenting experience of repeated trauma wears on them and that makes it a much more difficult problem to solve.”Even amid the stay-at-home order due to the coronavirus pandemic, gun violence is still on the rise in Chicago.According to a 2019 report by the Erikson Institute, a graduate school in child development in Chicago, “the majority of Chicago’s youngest children live in communities with high homicide rates, increasing the likelihood of an adverse impact on their early development due to environmental trauma.”G Herbo said that by opening up about PTSD on his album, he wanted to encourage others to “lean towards your fears to make your situation better so you can understand the reality of what we’re going through.”The rapper’s hope of helping others in his community is already resonating.Dr. Jaleel Abdul-Adil, a clinical psychologist and the Co-Director of the Urban Youth Trauma Center at the University of Illinois in Chicago, has been infusing traditional therapy methods with hip-hop for thirty years in an effort to connect with young people and when PTSD was first released in February, it immediately caught his attention.“When PTSD first came out, it immediately jumped out … especially when you’re working with trauma programs, how can you not?” Abdul-Adil said.The chorus of album’s title track “PTSD,” which features Chance the Rapper, Juice WRLD & Lil Uzi Vert, begins with this: “I got a war zone inside of my head/ I made it on my own, they said I’d be in jail or dead/ I’ve seen my brothers fall, over and over again/ Don’t stand too close to me, I got PTSD.”Abdul-Adil, who trains mental health providers and caretakers around the country to utilize hip-hop to connect with children, said that he first used G Herbo’s music in his sessions when the rapper released “Red Snow” in 2017 — a somber and evocative song about a particularly deadly winter in Chicago following a rash of shootings.He said that although music “doesn’t solve all the problems,” “it can certainly inspire you to think, behave, connect and begin to try to address your problems much better than the traditional means that often don’t engage youth.”“So what I do is I take the traditional programs, which are based on research and employ social sciences that are based on best practices, but I kind of season them, if you will, with rap music and hip hop language, examples and different things so that kids can hear what we’re saying,” he added.When told in a later interview that his music is being used in therapy sessions, G Herbo said “it feels great” to know that his songs are generating a conversation about mental health.“That’s the reason I do music — one of the reasons — to be able to help people because my music is a reflection of my life and the things that I’ve been through. I use it as a form of therapy to help me get through situations.”Copyright © 2020, ABC Audio. All rights reserved.

8 hospitalized after tornado rips through Chicago suburb: ‘Like a bomb went off’
Bitcoin slumps to two-week low amid renewed worries of Chinese restrictions
Jazz Jennings says ‘substantial’ weight gain due to binge-eating disorder
Paris Hilton spills on her upcoming wedding to fiancé Carter Reum: “I’m not your traditional bride”
Tyra Banks reacts to Victoria’s Secret phasing out Angels
Kevin Hart opens up to Will Smith about infidelity on Red Table Talk