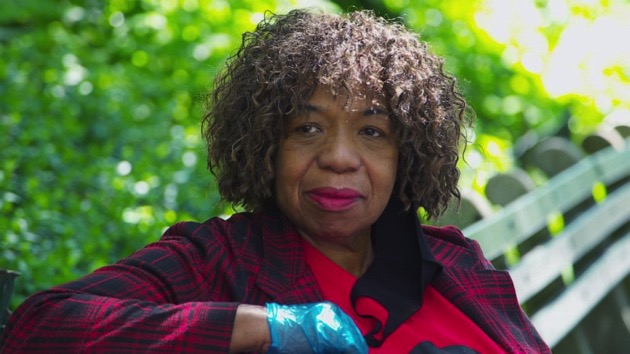 By JESSICA HOPPER, JOHN KAPETANEAS, CANDACE SMITH and ANTHONY RIVAS, ABC News(NEW YORK) — It’s been nearly six years since a white New York City police officer caused the chokehold death of Eric Garner, but his mother, Gwen Carr, says that the recent death of George Floyd — another black man whose dying words echoed her son’s — has brought back all the “darkness.”Floyd died Monday in Minneapolis after being apprehended by police and pinned to the ground for several minutes with a knee on his neck. In video of the incident, Floyd can be heard yelling, “I can’t breathe,” the same words Garner is heard saying in video of his July 2014 death.”It’s just a horrible thing to go through. It’s a recurring nightmare,” Gwen Carr said of Floyd’s death during an interview with Nightline co-anchor Juju Chang. “It’s worse than a nightmare because you never wake up… It just brings back all the bad feelings, all the anxiety, all the darkness of what happened to me that day.”Carr, who has spent years fighting for justice for her son, commended the Minneapolis Police Department for firing the four officers involved in Floyd’s arrest. But she said police departments still have a lot to learn about dealing with police misconduct and policing in neighborhoods with people of color.The Minneapolis Police Department said in a statement Monday that its officers were called to the scene for a “report of a forgery in progress.” The officers were advised that the suspect, Floyd, “appeared to be under the influence” and that he “physically resisted officers.”In bystander videos taken during the arrest, during which Floyd was pinned to the ground with a white officer kneeling on his neck, he is heard pleading, “I can’t breathe, please, the knee in my neck. I can’t move… my neck… I’m through. I’m through.”An ambulance was called for Floyd after he “appeared to be suffering medical distress,” but he died a short time after arriving at Hennepin County Medical Center, according to the police statement from Monday, which noted there were no weapons of any kind used by anyone involved in the incident and that no officers were injured.The Hennepin County Medical Examiner told ABC News his cause of death is pending further tests and investigation.Carr said bystander videos offer unbiased accounts of incidents like Garner’s and Floyd’s. Her son’s death was among the first whose video galvanized the nation.”When the video comes out, it shows exactly what happened,” she said. “You put him in medical distress. They said they tried to resuscitate him. After you fatally injured him, now you’re going to resuscitate him. What good is that going to do? It’s the same scenario, same exact thing with my son.””We need the video… so we can make sense of what actually happened in the arrests or takedown,” she added. “We need to know this.”Carr said that following the emergence of the video of Floyd, she called his family to express her condolences.”I was telling them how sorry I was for their loss,” she said. “I knew what they were feeling. I was horrified by this action because it just brought back the memories of what happened to my son. And actually, while I was on that call, tears was just streaming down as I spoke to them.”After her son died, Carr, a retired transit train operator, said she was “thrown into” activism in an effort to raise awareness of what had been done to Garner.”I don’t want any other mother to suffer like I’ve suffered,” she said. “And it’s not only with chokeholds.”Since 2014, the phrase “I can’t breathe” has become a rallying cry for demonstrators protesting police-involved deaths.”I think that they are symbolizing that they didn’t let my son breathe,” Carr said of the phrase. “And if he can’t breathe, that means that we can’t breathe because there is no justice. So we are chanting so that the people in politics, the people who are in the seats who can do something, let us breathe. Do something about these bad actors [in police departments]. Get them out.”Daniel Pantaleo, the officer responsible for Garner’s death, was fired from the New York City Police Department in August 2019 after a departmental judge ruled that he had used a prohibited chokehold that contributed to Garner’s fatal asthma attack. A Staten Island, New York, grand jury chose not to indict Pantaleo and the Department of Justice declined to press charges.Carr said there will never be justice for her son because he’s no longer here. But for her, she said there will be justice when all the officers that were involved in his death are held accountable and charged.She said she plans to keep working to create change. Her efforts so far, she said, have made it clear that she’s not going away.”I see a lot of times [with] these cases, they happen, we have crowds. We have thousands, tens of thousands of people who come out to support. And soon as the cameras go, soon as the lights go out, the people are going… But I wanted to let them know that it doesn’t mean anything if the camera is there or not, I’m going to be there,” she said. “I’m going to raise my voice. I’m going to talk to whoever I think that I can get through to, and the ones I can’t get through to, I’ll still work on them.”Copyright © 2020, ABC Audio. All rights reserved.