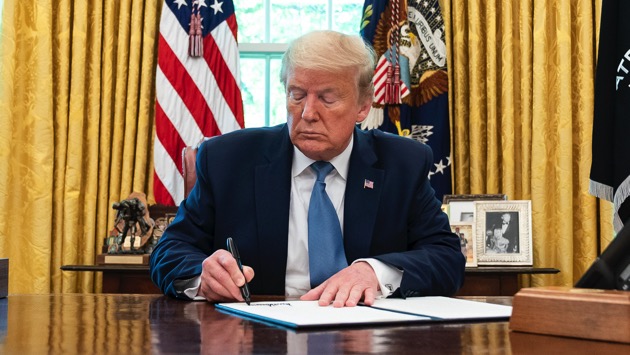 By KATHERINE FAULDERS and LIBBY CATHEY, ABC News(WASHINGTON) — President Donald Trump has tweeted it will be “a big day for social media and fairness” as he’s expected to sign an executive order Thursday that could expose social media platforms to more regulations and lawsuits, after Twitter earlier this week added fact-checks to two of the president’s tweets on mail-in ballots.

The social media executive order is expected to make it easier for companies like Twitter, Facebook and Google to be held liable for the content posted on their platforms, according to a draft obtained by ABC News.Although it’s still being drafted and is subject to change, the particular order — tentatively titled “Preventing Online Censorship” — has been in this works since 2019 and has seen multiple revisions along the way. The president’s recent threats prompted the draft to be revived internally.The draft asks that the scope of Section 230 in a law known as the Communications Decency Act, which provides broad immunity to websites that curate and moderate their own platforms, be clarified by curbing some liability protections.Republicans have also introduced legislation on Capitol Hill to strip these protections. Attorney General Bill Barr has raised concerns over Section 230 as well, saying it has the potential to enable online child exploitation.However, experts warn it could have a major impact on free speech on social media and predict this could land in the courts.”It is the policy of the United States to foster clear, nondiscriminatory ground rules promoting free and open debate on the internet. Prominent among those rules is the immunity from liability created by section 230(c) of the Communications Decency Act (section 230). 47 U.S.C. 230,’ the draft reads. “It is the policy of the United States that the scope of that immunity should be clarified.”The draft also states that “the emergence and growth of online platforms in recent years raises important questions about applying the ideals of the First Amendment to modern communications technology” and that online platforms are “engaging in selective censorship that is hurting our national discourse.””As President, I have made clear my commitment to free and open debate on the Internet. Such debate is just as important online as it is in our universities, our businesses, our newspapers, and our homes. It is essential to sustaining our democracy. In a country that has long cherished the freedom of expression, we cannot allow a limited number of online platforms to hand-pick the speech that Americans may access and convey online. This practice is fundamentally un-American and anti-democratic. When large, powerful social media companies censor opinions with which they disagree, they exercise a dangerous power.”The draft order also proposes that an online tool for tech bias reporting created by the White House Office of Digital Strategy be reestablished to “collect complaints of online censorship and other potentially unfair or deceptive acts or practices by online platforms and shall submit complaints received to the Department of Justice and the Federal Trade Commission (FTC). It directs the FTC to develop a report based off the complaints and make that report public, “consistent with applicable law.”Section 4 of the draft order also says the Attorney General “shall establish a working group regarding the potential enforcement of State statutes that prohibit online platforms from engaging in unfair and deceptive acts and practices.The White House office of digital strategy is directed to submit complaints received to this working group. The order also directs the working group to collect publicly available information on monitoring or creating watch-lists of users based on their interactions with content or users (e.g. likes, follows, time spent); and monitoring users based on their activity off the platform.The president first threatened the action on Wednesday after Twitter added a fact-checking feature to two of his tweets on mail-in balloting late Tuesday, calling the content “potentially misleading.”

Twitter has now shown that everything we have been saying about them (and their other compatriots) is correct. Big action to follow!

House Speaker Nancy Pelosi at a news conference on Thursday said, “We like to Twitter to put up their fact-check of the president but it seems to be very selective,” suggesting more of his tweets should come with a disclaimer.She then said most social media companies, singling out Facebook, are in the business of making money “at the expense of the truths and the facts.”

— ABC News Politics (@ABCPolitics) May 28, 2020 Facebook CEO Mark Zuckerberg called out Twitter for the action in an interview with Fox News airing Thursday, saying that privately-owned digital platforms should not act as the “arbiter of truth.””Private companies probably shouldn’t be, especially these platform companies, shouldn’t be in the position of doing that,” he said.

Twitter CEO Jack Dorsey sent out a series of tweets Wednesday night providing more details on how the platform will employ fact-check links.Dorsey said that the platform will “continue to point out incorrect or disputed information about elections globally,” suggesting Twitter is prioritizing fact checks on tweets related to elections.

This does not make us an “arbiter of truth.” Our intention is to connect the dots of conflicting statements and show the information in dispute so people can judge for themselves. More transparency from us is critical so folks can clearly see the why behind our actions.

Twitter’s Civic Integrity Policy, which is dated May 2020, states that Twitter may not be used “for the purpose of manipulating or interfering in elections or other civic processes. This includes posting or sharing content that may suppress participation or mislead people about when, where, or how to participate in a civic process.”Policy violations include tweeting misleading information about how to participate in elections, tweets intended to suppress voting or intimidate voters, and creating fake accounts claiming to be tied to a candidate or political party.Violations can result in tweet deletion, profile modifications and permanent suspension, according to the policy.White House press secretary Kayleigh McEnany on Fox News Thursday morning declined to comment on the specifics of the social media-related executive order, saying, “it’s still in the works.”She did say Twitter’s handling of Trump’s mail-in ballot tweets prompted the action.”We have seen some egregious actions by Twitter. For them to single out the president’s tweet, which was a very truthful tweet, you’ve gotta ask yourself, what kind of political motivation was there in them doing that, when they were not signaling, until minutes ago, when I walked out here, they were not fact-checking Chinese propaganda, which was blaming COVID on the United States military?”However, Twitter put labels on those tweets Wednesday as well.McEnany also seemed to support Mark Zuckerberg’s statement Wednesday that “Facebook shouldn’t be the arbiter of truth,” contrasting that with Twitter’s approach.Though the president has spent part of his morning going after social media, he also attacked the Mueller probe, former President Barack Obama and Democratic presidential nominee Joe Biden.The only coronavirus related tweet on the president’s feed so far today was an attack on Michigan Democratic Gov. Gretchen Whitmer’s coronavirus restrictions.While Twitter has started fact-checking tweets, Facebook, meanwhile, has chosen not to regulate its political advertisement content.Copyright © 2020, ABC Audio. All rights reserved.

8 hospitalized after tornado rips through Chicago suburb: ‘Like a bomb went off’
Bitcoin slumps to two-week low amid renewed worries of Chinese restrictions
Jazz Jennings says ‘substantial’ weight gain due to binge-eating disorder
Paris Hilton spills on her upcoming wedding to fiancé Carter Reum: “I’m not your traditional bride”
Allyson Felix qualifies for fifth Olympics, celebrates with her 2-year-old daughter on the track
Khloe Kardashian confirms she’s had a nose job