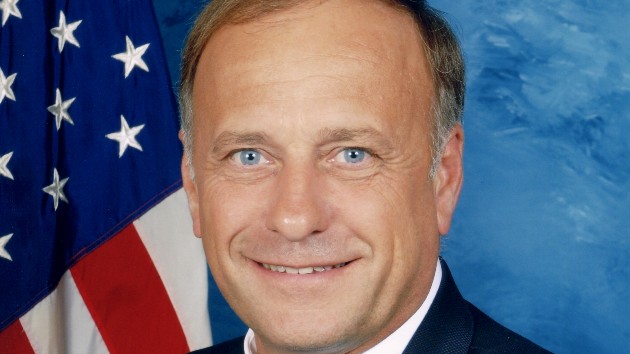 By BENJAMIN SIEGEL, ABC News(WASHINGTON) — For years, he’s been an Iowa conservative kingmaker. His annual pheasant hunts required stops for GOP White House hopefuls.But now, after losing his committee seats following comments about white supremacy, Rep. Steve King is on his own, caught in a five-candidate primary challenge that could end his political career. “It’s his biggest threat ever, and largely because he’s gone a bridge too far in rendering himself useless for Iowans,” said Doug Gross, an attorney and strategist in Iowa who was the Republican nominee for governor in 2002.State and national GOP groups, including the U.S. Chamber of Commerce, Republican Jewish Coalition and National Right to Life have thrown their weight behind Randy Feenstra, a conservative state senator who has raised more money than King, and panned the veteran congressman as ineffective.“Our farmers, our families and our President deserve an effective leader that can deliver conservative results,” Feenstra told ABC News in an email.“Leaders deliver. Steve King couldn’t,” the narrator says in Feenstra’s most recent television ad.King doesn’t need to win outright to keep his seat and win the GOP nomination: The contest will go to a convention if no candidate receives more than 35 percent of the total primary vote — though either King or Feenstra, if not both, are expected to meet the threshold.And he has some history with conventions: King won his first House primary race on the third ballot in a nominating convention in 2002.“If it goes to convention, which it could, I think that’s his best shot to win,” Brent Siegrist, a former speaker of the Iowa state legislature who lost to King in that 2002 convention by 19 votes. “The delegates that are selected tend to be those hardcore, true believers, if you will, and Steve plays very well with them.”While King has courted controversy with comments about abortion, immigration and race in the past — including remarking that some immigrants have “calves the size of cantaloupes” from “hauling 75 pounds of marijuana across the desert” — it was his comments to the New York Times about white supremacy that prompted swift backlash from his party.”White nationalist, white supremacist, Western civilization — how did that language become offensive?” he told the paper in a recorded interview he later disputed.After the remarks, the eight-term Republican was rebuked by House Republican leadership and stripped of his committee posts in January of 2019.Longtime allies, including Iowa Sens. Chuck Grassley and Joni Ernst, condemned his remarks. Sen. Ted Cruz, who appointed King the co-chair of his 2016 presidential campaign, called the comments “stupid.”Since then, King has seen his support dry up across the country, and has just over $30,000 in the bank heading into the final stretch of the campaign.Feenstra has received contributions from former Iowa Gov. Terry Branstad and a number of House Republicans, while outside groups have run ads — including one spot featuring Bob Vander Plaats, a prominent social conservative leader in Iowa — attacking the congressman and boosting Feenstra’s profile.President Donald Trump, who had previously praised King’s record on immigration — the congressman promoted a U.S.-Mexico border wall a decade before Trump took office — has been silent on the primary, leaving the race out of a slew of House GOP endorsements he tweeted over the weekend.While King recently told an Iowa newspaper House Minority Leader Kevin McCarthy agreed to help him reclaim his committee posts, the California Republican quickly disputed the claim, telling reporters he “never said that.”“Committee assignments are decided by the Steering Committee, and he’ll have the opportunity to make his case,” McCarthy said.In interviews, Republican operatives told ABC News that King’s lack of clout, more than his policy positions, makes him vulnerable to a primary challenge from Feenstra.“It’s not really about the things that he said and the outrageous comments, it’s about his effectiveness and spots on the committees at a time when agriculture is struggling and small businesses are struggling,” said Dave Kochel, a veteran GOP strategist who has donated to Feenstra and is working with Priorities for Iowa, a Super PAC supporting the state senator.They also argued that King, who came within three points of losing his ruby-red House seat to Democrat JD Scholten in 2018, could hurt Republican turnout in the fall — when Scholten will be back on the ballot, and Ernst and Trump will need support from the conservative voters in the district to help win the state.“Part of this effort is to make sure that King as a nominee is not an albatross around Joni Ernst’s neck,” Scott Reed, a senior political strategist for the Chamber of Commerce, told ABC News.King, whose campaign did not respond to a request for an interview, recently told a local Republican group that his views are in step with the Republican Party.“I’m happy to have all of this scrutiny. I want people to look at my record,” he told the Stone County Republican Party in a recent online candidate forum. “I think people who are going back to the polls will be pleased with the job that I have been doing.”In a televised primary debate earlier this week, he also attributed the backlash he’s faced to “Never Trumpers” who “ginned this all up.”“There’s powers that be, some of them are money powers, not all of them, that want Steve King out of the way, because they like to do battle on life, on marriage, on budgets, and on guns,” he said at the debate hosted by WHO-13. Copyright © 2020, ABC Audio. All rights reserved