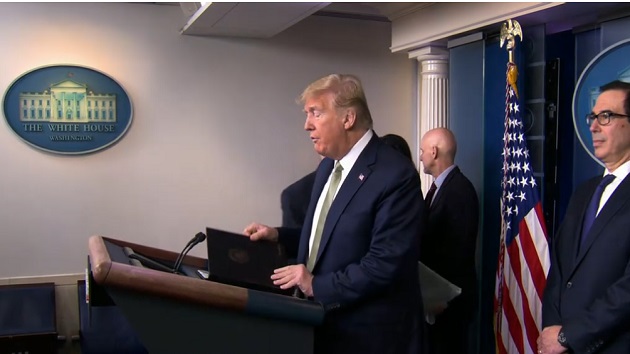 The executive order President Donald Trump signed targeting Twitter and other the social media giants could prove toothless and face legal challenge, experts said.The president’s order, a draft of which was obtained by ABC News, takes aim at part of a 1996 law that has given technology companies like Twitter, Google and Facebook immunity from lawsuits based on the content its users post. It was expected to push federal agencies to review those protections.But experts said it was likely up to Congress, not Trump and the executive branch, to reinterpret the part of the law in question, Section 230 of the Communications Decency Act. The executive order, as drafted, would also raise significant First Amendment questions and could face legal challenge, they said.Lawmakers on both sides of the aisle have criticized Section 230, which grants liability protections to companies that run social media platforms, but have differed on how to address it. Democrats have said social media giants do not do enough to regulate content, while Republicans say they do too much.According to the draft copy of the order, tentatively titled “Preventing Online Censorship,” the president will ask for a review of Section 230, which states “no provider or user of an interactive computer service shall be treated as the publisher or speaker of any information provider by another information content provider.”The order is expected to push the Federal Communications Commission and the Federal Trade Commission to review these protections — and it may start a messy debate and face multiple legal challenges — particularly the First Amendment, which protects free speech.

Trump’s impact may be limitedWhile many lawmakers agree Section 230 needs to be changed, experts said it is likely up to Congress — not the president — to do so.While the draft of the order said the review of Section 230 should start without Congress, the American Civil Liberties Union said Congress was the only body with the power to reinterpret the law.“The president has no authority to rewrite a congressional statute with an executive order imposing a flawed interpretation of Section 230,” the ACLU tweeted. “Section 230 incentivizes platforms to host all sorts of content without fear of being held liable. It enables speech, not censorship.”Jonathan Turley, a Republican lawyer who testified in the House impeachment proceedings as the sole Republican witness, took issue with Twitter’s fact-check labels on the president’s tweets, but he said that without legislation in Congress, Trump’s order is unlikely to move anything forward.“His new executive order would seek the elimination of key liability protections for social media companies while calling for federal investigations into political bias,” Turley wrote in a column in The Hill Thursday. “Without legislative support, such a crackdown on these companies is unlikely to succeed. However, Congress has been angling to curtail internet free speech for years.”While Twitter “said Trump did not violate its rules, it still intervened between him and his followers to add its own view of the truth on a political controversy,” Turley said.The order also ignores two and a half decades of judicial precedent since the law passed in 1996, in which courts have almost always found platforms to be protected by Section 230, according to Kate Klonick, an assistant professor of law at St. John’s University, in Queens, N.Y.“It’s not the president’s job to interpret federal law, and it’s just very unlikely that a court will suddenly decide to go back against all this precedent,” Klonick told ABC News.She said the order, as drafted, did not contain much that was actually enforceable and appeared to be more of a signal to Trump’s base that he is fighting tech companies, who he has long maintained are biased against conservatives.“If the purpose of the executive order is to actually have any kind of effect on how social media companies actually police online moderation — if they’re biased against conservatives — then this is likely to have very little effect,” she said.Two Democratic FCC commissioners raised questions Thursday about the expected order.”“This does not work,” Jessica Rosenworcel wrote. “Social media can be frustrating. But an Executive Order that would turn the Federal Communications Commission into the President’s speech police is not the answer. “FCC commissioner Geoffrey Starks said he would review the order, but noted, “the First Amendment and Section 230 remain the law of the land and control here.”

‘Egregious actions by Twitter’ prompted order, White House saysMcEnany, the White House press secretary, said Thursday morning that Trump decided to sign the executive order after Twitter put labels on two of his tweets about mail-in voting that directed users to pages offering more context.”We have seen some egregious actions by Twitter,” she said in an interview with Fox News. “For them to single out the president’s tweet, which was a very truthful tweet, you’ve gotta ask yourself, what kind of political motivation was there in them doing that?”On Wednesday, Trump threatened to “strongly regulate” social media platforms “or close them down” because, he said, without offering evidence, “Republicans feel that Social Media Platforms totally silence conservative voices.”But it was unclear if the White House had worked with the FCC on the order. When it was first rumored back in 2019, Rosenworcel tweeted a link to a CNN article about it with the added comment, “What.”

Bipartisan support for reformBoth sides of the political aisle think Section 230 needs to be reformed, but for different reasons.Democrats like the party’s presumptive presidential nominee, Joe Biden, have said it doesn’t moderate content enough, while Republicans have alleged that it moderates content way too much.Attorney General Bill Barr has raised concerns over Section 230 as well, saying it has the potential to enable online child exploitation.In April 2019, Speaker Pelosi said that Section 230 was “a gift” for these tech companies.“I do think that for the privilege of the 230, there has to be a bigger sense of responsibility of it. And it is not out of the question that that could be removed,” Pelosi said in an interview with Recode. When asked this morning about the executive order, Pelosi called it “silly.”Biden told the New York Times editorial board that Section 230 should be revoked immediately. He was asked about a letter his campaign sent to Facebook about an advertisement that falsely claimed he blackmailed officials in Ukraine to not investigate his son, Hunter Biden.“The idea that it’s a tech company is that Section 230 should be revoked, immediately should be revoked, number one. For Zuckerberg and other platforms,” Biden said.Barr said in December 2019 that the Department of Justice was studying the scope of the law.“Section 230 was passed at a time where the internet was relatively new, and Congress wanted to protect the growth of online services and the ability for the internet to offer “a forum for true diversity of political discourse,” Barr said according to a transcript of his remarks.“Section 230 has been interpreted quite broadly by the courts. Today, many are concerned that Section 230 immunity has been extended far beyond what Congress originally intended. Ironically, Section 230 has enabled platforms to absolve themselves completely of responsibility for policing their platforms, while blocking or removing third-party speech – including political speech – selectively, and with impunity.” Copyright © 2020, ABC Audio. All rights reserved.