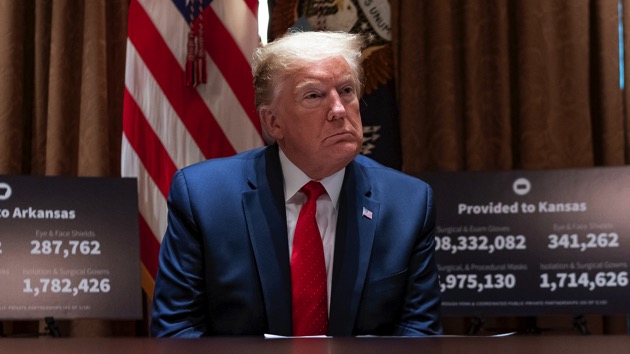 By LIBBY CATHEY, ABC News(WASHINGTON) — More than 14 hours after 100,000 Americans were reported to have died from the novel coronavirus, President Donald Trump on Thursday acknowledged the death toll, calling it a “very sad milestone.”In a tweet Thursday morning, Trump said he extends his “heartfelt sympathy & love for everything that these great people stood for & represent.”

This comes after the president for months downplayed the coronavirus, comparing it to the flu, and suggested throughout the month of April that the country wouldn’t reach 100,000 deaths.At the same time, in what critics say is a part of an effort to distract from the bad news — and to highlight his claims that states moving to mail-in voting amid the pandemic will lead to fraud — Trump is expected to sign an executive order Thursday on social media that would make it easier for companies like Twitter, Facebook and Google to be held liable and face lawsuits for the content posted on their platforms, after Twitter fact-checked two of the president’s tweets on mail-in ballots.Here are Thursday’s most significant developments in Washington:Trump expected to sign executive order against social media companiesPresident Donald Trump has tweeted it will be “a big day for social media and fairness” as he’s expected to sign an executive order that could expose social media platforms to more regulations and lawsuits, following his tweets alleging widespread fraud will result from states allowing mail-in voting amid the pandemic.The draft, obtained by ABC News, comes after Twitter earlier this week added fact-checks to two of the president’s tweets alleging mail-in ballots will produce fraud, calling the president’s content “potentially misleading.”

It asks that the scope of Section 230 in a law known as the Communications Decency Act, which provides broad immunity to websites that curate and moderate their own platforms, be clarified by curbing some liability protections.However, experts warn it could have a major impact on free speech on social media and predict it could land in the courts.– ABC News’ Katherine FauldersCopyright © 2020, ABC Audio. All rights reserved.