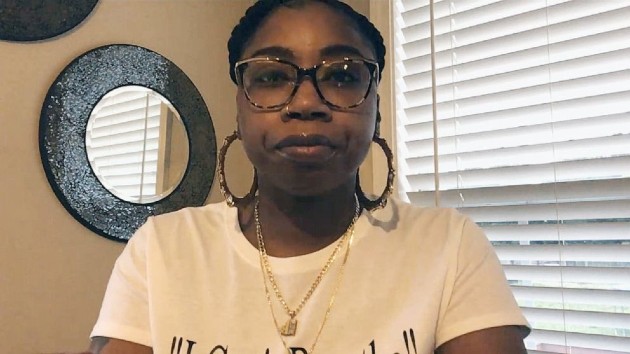 By MORGAN WINSOR, ABC News(NEW YORK) — Bridgett Floyd thought she was dreaming when she received a phone call Monday night and was told that her brother, George Floyd, had died shortly after being apprehended by Minneapolis police.”Everything went blank,” she told ABC News in an interview on Good Morning America on Wednesday. “I had a very hard time taking that, taking that in.”Disturbing video later emerged on social media showing a white police officer with his knee on a black man’s neck as he repeatedly yells out, “I can’t breathe.””I can’t breathe, please, the knee in my neck,” the man can be heard saying in the video as he’s pinned to the ground. “I can’t move … my neck … I’m through, I’m through.”The Minneapolis Police Department said in a statement Monday that their officers were initially called to the scene “on a report of a forgery in progress.” The officers were advised that the suspect “appeared to be under the influence” and that he “physically resisted officers.”The suspect later “appeared to be suffering medical distress” and officers called an ambulance. He was transported to the Hennepin County Medical Center in Minneapolis, “where he died a short time later,” according to the statement, which noted that there were no weapons of any type used by anyone involved in the incident and that no officers were injured.The Hennepin County Medical Examiner told ABC News the cause of death is pending further tests and investigation.Police did not identify the man who died, but civil rights attorney Ben Crump, who is representing his family, said he was George Floyd.”It was nine minutes,” Crump told ABC News on GMA Wednesday. “Just imagine what George Floyd endured for those nine minutes begging for breath, begging for life.”Bridgett Floyd said she hasn’t watched the footage herself but has been told what it shows.”It’s wrong. I don’t understand how someone could possibly let an individual go out like that,” she said. “I’m just imagining it in my head, and it’s very heartbreaking.”George Floyd worked as a security guard at Conga Latin Bistro in Minneapolis for more than five years, according to Jovanni Thunstrom, the owner of the restaurant, which is closed due to the coronavirus pandemic.Thunstrom told ABC News that George Floyd was renting a duplex apartment from him and that he had a daughter in Houston whom he was planning to bring to Minneapolis to live with him.”I loved him like a brother,” Thunstrom told ABC News in tears on Tuesday, describing him as an excellent person whom many of the customers and employees loved.The Minneapolis Police Department announced Tuesday morning that the Federal Bureau of Investigation will be a part of the probe into the man’s death. Minneapolis Police Chief Medaria Arradondo also pledged the department’s full cooperation with any investigations.Earlier, Minneapolis Mayor Jacob Frey announced that all four responding officers involved in the incident have been fired.”Being black in America should not be a death sentence,” Frey said at a news conference Tuesday morning. “When you hear someone calling for help, you’re supposed to help. This officer failed in the most basic, human sense.”The police union representing the officers did not immediately respond to ABC News’ request for comment Tuesday.A member of the Kelly and Jacobson law firm in Minneapolis confirmed that attorney Tom Kelly is representing Derek Chauvin, one of the officers seen in the video.Bridgett Floyd said terminating the officers is “definitely not enough justice for me or my family.””They murdered my brother. They killed him,” she told ABC News. “Firing them is just not enough.”As a mother to black sons, Bridgett Floyd said she worries the same fate could happen to them when they grow up.”You never know what could happen when they walk out the door. They’re small kids right now, but one day they’re going to be adults,” she said. “They need to know how to defend themselves, how to stand up for themselves, how to talk for themselves because if I don’t teach that to them, this world, this cold, cold world will take over my babies.”

Delta COVID-19 variant is now in more than 80 countries, WHO says
Biden signs bill making Juneteenth, marking the end of slavery, a federal holiday
Biden to sign bill making Juneteenth, commemorating the end of slavery, a federal holiday
The Beatles documentary ‘Get Back’ to premiere as three-part event on Disney+ this November
Regé-Jean Page breaks his silence on filming ‘Bridgerton’s steamier scenes: “It was overwhelming”
Rental car scams on the rise