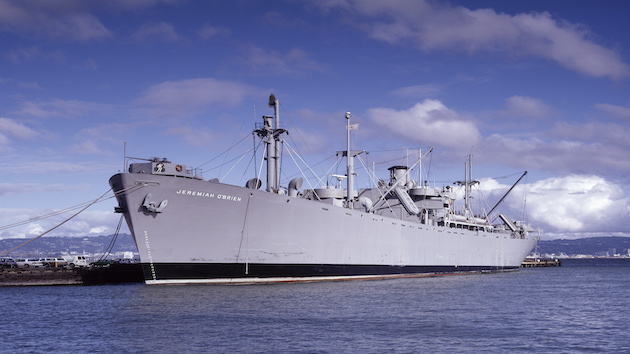 Carol M. Highsmith/Buyenlarge/Getty Images
Posted on May 23, 2020 by ABC News

(SAN FRANCISCO) — No injuries have been reported from a large warehouse fire in San Francisco that was still raging Saturday afternoon, hours after erupting, officials said.

The blaze at Pier 45 at Fisherman’s Wharf initially threatened a historic World War II ship, but officials said they were able to save it.

The SS Jeremiah O’Brien, one of just two remaining fully functioning Liberty ships that were launched during World War II and which stormed Normandy in the 1944 D-Day operation, suffered only paint damage, according to the San Francisco Fire Department.

There is a massive fire at Fisherman’s Wharf right now —one of the piers #sf #SanFrancisco #sffire #SanFranciscoFire pic.twitter.com/rffAFUWuWA

Officials said 150 firefighters had been called to the scene. The flames aren’t expected to spread to other structures, but officials have not yet declared the fire under control.

No other boats were damaged, officials said.

Three businesses were affected by the fire, all of which — blue and gold fleet offices, red and white fleet offices and Jeremiah O’Brien fleet offices — are ferry or vessel services.

The fire was first reported around 4:40 a.m., according to ABC San Francisco station KGO-TV.