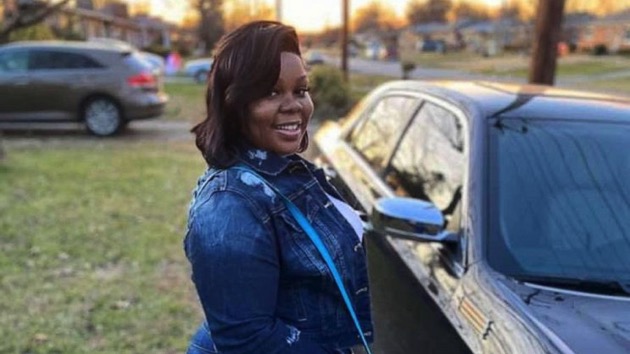 By CHRISTINA CARREGA, ABC News(LOUISVILLE, Ky.) — The FBI in Louisville, Kentucky, has opened an investigation into the police-involved shooting death of front-line worker Breonna Taylor.Taylor and her boyfriend, Kenneth Walker, were sleeping inside their Springfield Drive apartment on March 13 when officers with the Louisville Metro Police Department attempted to execute a “no-knock” search warrant.Three plainclothes officers opened Taylor’s front door and “blindly” opened fire into their apartment, according to a wrongful death lawsuit filed in April by Taylor’s mother, Tamika Palmer.Taylor, a licensed EMT, was shot at least eight times and died.”The FBI will collect all available facts and and evidence and will ensure that the investigation is conducted in a fair, thorough and impartial manner. As this is an ongoing investigation, we are not able to comment further at this time,” said Special Agent in Charge Robert Brown in a statement on Thursday.

Due to a number of media requests, FBI Louisville is issuing the following statement. pic.twitter.com/i64rb9DW2z

The police said they knocked several times before using a ram to open the door and were allegedly met with gunfire. Walker was charged with shooting Sgt. Jonathan Mattingly in the leg.Taylor was accused of accepting USPS packages for an ex-boyfriend who police were investigating as an alleged drug trafficker and used her address, according to the warrant.Mattingly and Officers Brett Hankinson and Myles Cosgrove were placed on administrative reassignment pending an investigation and are named as defendants in the lawsuit. An investigation is also being conducted by the Louisville Metro Police Department’s Public Integrity Unit.Louisville Police Department Chief Steve Conrad said at a press conference after the shooting the officers who worked with their criminal interdiction unit did not wear body cameras.Conrad announced his retirement on Facebook Thursday after a “40-year career in law enforcement” but will continue to work until June 30 on administrative duties. Col. Rob Schroader will come on as the interim chief on July 1.”You all are weathering a lot right now and I know how challenging this is. Approach this as we approach all our struggles — as a team. Look out for each other,” wrote Conrad on the Facebook post. “Show compassion to the community, even when it might not be shown to you.”Palmer’s attorneys Ben Crump, Sam Aguiar and Lonita Baker saw Conrad’s announcement as a “resignation.””[It] was a significant step forward in getting justice for Breonna Taylor, her family, and the city of Louisville. But this is just the beginning of that journey,” the attorneys said in a joint statement. “We look forward to further investigation, including by the FBI, into the chain of events that led to Breonna’s tragic and preventable death.”

MAJOR DEVELOPMENTS IN #BreonnaTaylor case! We will not rest until everyone involved is held accountable and we get #JusticeForBre!! https://t.co/hh1NWi69GX https://t.co/PQqP1ncBMS https://t.co/xXvNfXOqnz pic.twitter.com/f8vR6NWmmo

Leslie Jones opens up about the sobering advice she’d give her younger self about rioting
Lynching is not a federal crime in the US, Sen. Rand Paul stands in the way
Police immunity rule getting fresh look by Supreme Court after George Floyd death
Renewed skepticism of law enforcement dims Klobuchar, Harris, Demings VP nod
George Floyd protest updates: Famous monument of Robert E. Lee to be removed
Peaceful protests for George Floyd prevail in NJ, despite history of racial tensions with police