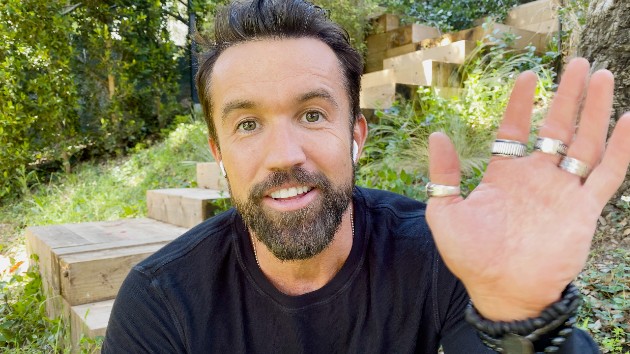 Shot entirely on iPhones, the show finds the team behind the biggest multiplayer video game of all-time tasked with working from home. To achieve this, the cast rehearsed, then later lighted and shot themselves from their homes on iPhones, with couriers later picking up and sanitizing each device before the footage was edited.

Show star and co-creator Rob McElhenney told ABC Audio, “What we tried to do from the very beginning was to make sure we made an episode that was at the very least fun and funny and would bring a certain amount of levity to people’s lives when they’re sitting in their house for the last three months and possibly the next month ahead.”

He added, “[A]t best, to make people feel a little bit less alone and then maybe leave them with a sense of optimism and triumph that there’s a group of people that work together on something and they succeeded. And it doesn’t work unless they all do it, that if one person f***s it up, then the whole thing is ruined. I think there’s something fun about that.”

So will there be an Always Sunny in Philadelphia quarantine episode?

“Yes,” revealed McElhenney, who is also the co-creator of that show. “The difference is…that in Mythic Quest the characters are being very respectful…we’re being very respectful of the science and the reality of where the world is. The Sunny characters…I don’t think that they believe in science unless it suits their needs and they wouldn’t be respectful of anything or anybody but themselves. So I think it’s a completely different episode. But it’s one we’ll have to explore.”

Also unlike the characters on Sunny would do, the cast of Mythic Quest raised $300,000 for NGO Mercy Corps’ COVID-19 relief program, a figure that was matched by McElhenney and his Sunny co-star and wife Kaitlin Olson, for a total of $600,000.