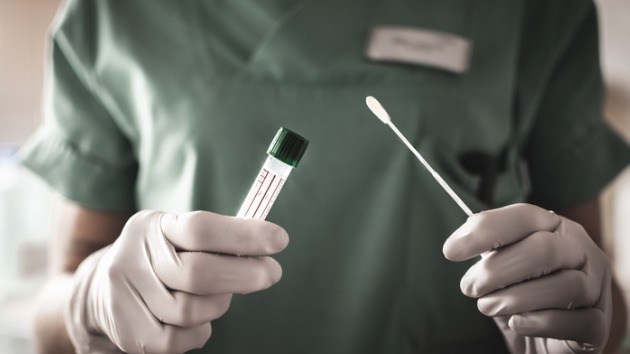 By IVAN PEREIRA, ABC NEWS(LANSING, Mich.) — Gov. Gretchen Whitmer’s cautious approach to reopening Michigan put her at odds with protestors clamoring for faster solutions, but data from recently ramped-up testing shows something on which perhaps all sides can agree: slow but steady progress.Positive COVID-19 cases are declining statewide, according to the Michigan Department of Health and Human Services, with new per-day cases for the first 20 days in May falling by almost 60%, to 378 from 932, compared with the same period in April. Total cases over those 20-day spans fell to 7,569 from 18,641.Hospitalizations through May 20 also declined, to 1,054 from 2,100 in April, according to a health department spokeswoman.”The data shows that Michigan is ready to phase in these sectors of our economy, but we must stay vigilant and ensure we’re doing everything we can to protect ourselves and our families from the spread of COVID-19,” Whitmer said in a statement.Whitmer also announced on Thursday that gatherings that didn’t exceed 10 people, so long as they respected social distancing, would be allowed immediately statewide. Michigan’s retail and auto shops can reopen by appointment starting May 26, and nonessential medical, dental and veterinary services are allowed to reopen May 29.Earlier this month, she allowed manufacturing businesses, including automobile factories, to restart with certain restrictions after many residents, state leaders and even President Donald Trump criticized her stay-at-home order as too strict.Michigan had 53,009 positive cases and 5,060 related deaths as of May 20, according to state health department data. Roughly 68% of cases have been recorded in the southeast section of the state, which includes Wayne County, which has seen the fifth-most deaths, 2,284, and 12th-most cases, 19,432, in the U.S., according to data from the Center for Systems Science and Engineering at Johns Hopkins University.Through the first 18 days of May, Michigan was administering an average of 14,396 daily tests, compared with 4,628 during the first 18 days of April, health department data shows. Through May 18, almost 453,000 tests had been administered with a positive rate of 15%, compared with 208,157 total state-administered tests at a rate of 23.4% at the end of April.”We have a short-term goal of reaching 15,000 tests per day, and a goal of reaching 30,000 tests per day by June,” Lynn Sutfin, a spokeswoman for the Michigan Health Department, said in a statement to ABC News. “Over the past week, we have averaged around 17,000 tests per day.”Whitmer, a Democrat who’s spoken to Joe Biden’s campaign about potentially becoming his running mate, has fended of criticism from groups of protestors, hundreds of whom — many armed — stormed the Capitol in Lansing during an April 30 rally.Some barbers and hairstylists on Wednesday staged a rally where they cut people’s hair despite current orders from the governor, who’s said repeatedly any plan to reopen her state’s economy would have to be balanced with the best-available health data.”While I respect people’s right to dissent,” she said last week on “The View,” “they need to do it in a way that is responsible and does not put others at risk.”Copyright © 2020, ABC Audio. All rights reserved