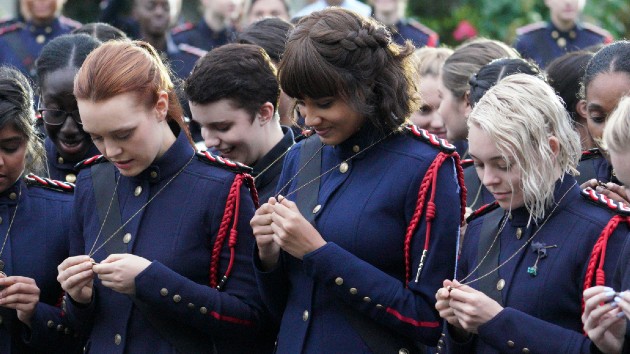 (LOS ANGELES) — Wednesday night is the first-season finale of Freeform’s Motherland: Fort Salem, a series set in an alternate, present-day America where witches are part of the U.S. military.  The show’s just been renewed for a second season, and star Jessica Sutton tells ABC Audio that she’s thrilled.

“I was hoping and praying and just putting it out there in the universe…because the response has been so amazing and I’ve just been feeling so much love from the growing fandom,” she tells ABC Radio.

“And yeah, I think all the girls [in the cast] were just feeling like there’s just so much more to explore in the world. And these characters…We want to know what happens to them!”

Motherland is a very female-driven show that focuses on three young witch cadets; Sutton plays cadet Tally Craven. She believes that the show’s struck a chord with viewers because of the tight bond between her character and the other cadets in her unit, played by Taylor Hickson and Ashley Nicole Williams.

“We’ve got this amazing fellowship, and I think ultimately at the end of the day, Motherland  — stripped of all its military bad-assery and the awesome empowerment that every character finds and undergoes –…it’s a love story,” she explains.

In tonight’s finale, Sutton’s character makes a huge sacrifice, and there’s a major cliffhanger.  As for what she’s looking forward to in Season 2, Sutton says she’s “in the dark” about what will happen to Tally and her fellow witches.

But, she adds, “I’m hoping that we see the unit’s dynamic changing, and understanding Tally’s power, because I feel like we were just touching on that.”

Sara Bareilles reacts to ‘Girls5Eva’ season two pickup: “We’re officially TWO hit wonders!”
Ewan McGregor’s daughter Clara is all smiles at movie premiere after suffering a dog bite to her face
‘In the Heights’ debuts to disappointing $11.4 million; ‘A Quiet Place Part II’ regains the top spot
Biden says ‘America is back at the table’ as 1st foreign trip continues
How a possible ban on spectators at Tokyo Olympics could impact athlete performance
Why Elijah Wood is excited about his new movie’s Tribeca Film Festival debut tonight