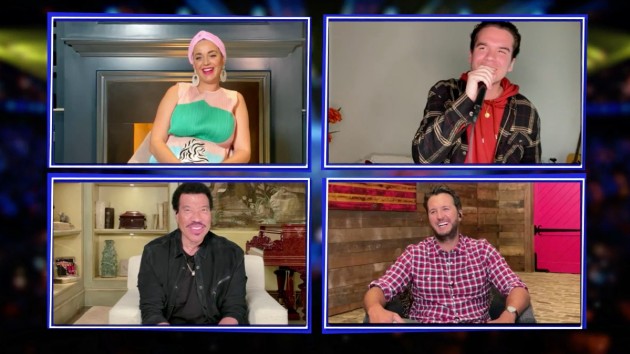 (LOS ANGELES) — This Sunday night, American Idol will air its very first remote finale.  And while all the judges agree that the remaining contestants are very talented, Katy Perry isn’t shy about revealing who she’s rooting for.

“If I can be completely honest about my favorites, Jonny West and Julia Gargano,” Katy tells ABC News. “Those are my picks. But it’s up to America to vote for who they want…it could easily be Francisco [Martin] or it could be Louis Knight, or Arthur [Gunn]. We’ll see!”

Judge Lionel Richie is also a big fan of the guitar-strumming, raspy-voiced Arthur Gunn, telling ABC News, “He has that sound all by himself.”  But he believes that all seven — Arthur, Jonny, Julia, Just Sam, Louis, Francisco and Dillon James — will go on to have successful careers.

“Everyone has their specialty that I’m loving…it’s not even a competition between each other anymore,” Lionel says. “It’s just all about, ‘How great can you be on the next thing you do?"”

On Sunday, the Top Seven will be whittled down to the Top Five, after which each contestant will sing two numbers: One they’ve previously performed, and the single they’ll release if they win the title.  Ryan Seacrest will announce the winner live.

In addition, Lionel Richie will sing the all-star 1985 charity single “We Are the World,” which he co-wrote with Michael Jackson, performing with the judges and American Idol alumni Alejandro Aranda, Gabby Barrett, Katharine McPhee, Kellie Pickler and Lauren Alaina, and past winners Jordin Sparks, Laine Hardy, Phillip Phillips, Ruben Studdard and Scotty McCreery.

Additionally, Katy will sing her new song, “Daisies,” and Luke Bryan will perform his current hit, “One Margarita.”  There may be other surprises, but here’s what’s in store for now:

–Cynthia Erivo and the Top 11 perform a medley of Aretha Franklin songs.–Lauren Daigle and the Top 5 will sing her hit “You Say.”–Superstar country group Rascal Flatts will sing “Bless the Broken Road.”

The American Idol season finale airs Sunday, May 17, at 8 p.m. ET. The series has officially been renewed for a season four.