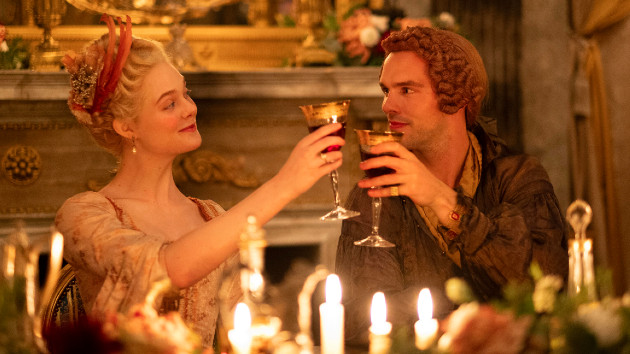 (NEW YORK) — The Great is not your typical period piece. Yes, the 18th century costumes are beautiful, the sets are ornate — but don’t be surprised to hear an f-bomb fly out of a royal’s mouth.With a biting script from The Favourite writer Tony McNamara, the royally outrageous new Hulu comedy stars Elle Fanning as the fiercely feminist Catherine the Great, who plots to overthrow her petulant husband, Emperor Peter III of Russia, played by Nicholas Hoult. “We say it’s ‘loosely historically accurate,’ but there are certainly things the real Catherine did that we incorporate in our show and pretty astounding things like if you think about it,” Fanning, who also scored her first executive producer credit on the show, tells ABC Audio.She adds, “I mean, she brought formal education to Russia. She brought art. She brought science. She invented the roller coaster. She overthrew her husband! Like she is the feminist icon, I would say.”Emperor Peter, as he’s played in the show, was a bit less accomplished. Hoult says playing such an “extreme, ridiculous” character was a lot of fun and there wasn’t much that shocked him by the end of it.“There’s an episode where my character is kind of in some ways born again and gets a new lease on life and believes that he’s changing and decides that he doesn’t need clothes for a while,” Hoult laughs. “I remember being — not shocked. I was like, ‘Oh, this is a turn…’”

The Great debuts today on Hulu.

Restaurants, bars face abrupt end of to-go and delivery alcohol sales in New York
‘Interview with the Vampire’ TV series coming to AMC
How to watch Thursday night’s ‘Strawberry Moon,’ the last supermoon of 2021
Watch ‘The Harder They Fall’ teaser; OWN, Onyx Collective & Hulu partner for ‘The Hair Tales’; & more
Surfside building collapse updates: At least one dead as search and rescue continues
Don Cheadle shares “the fun” in being a part of Steven Soderbergh’s twisty noir crime drama ‘No Sudden Move’