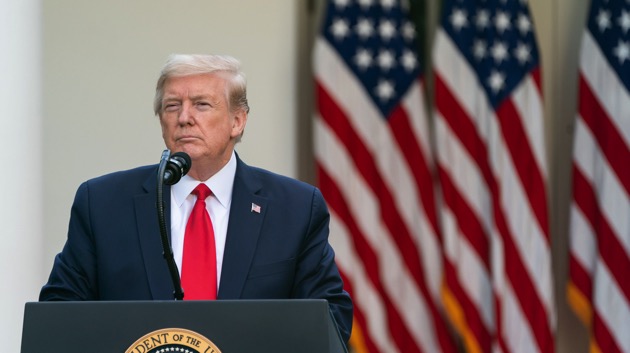 Official White House Photo by Andrea Hanks
Posted on May 12, 2020 by ABC News

By BEN GITTLESON, ABC News(WASHINGTON) — The White House on Tuesday denied President Donald Trump was trying to distract from the novel coronavirus pandemic by making the extraordinary accusation over the weekend that his predecessor, Barack Obama, had committed unspecified crimes.Days after the Justice Department asked a judge to drop the criminal case against Trump’s first national security adviser, Michael Flynn, Trump asserted on Sunday, without providing evidence, that Obama had some sort of illegal role in the FBI’s initial investigation of Trump’s first, incoming national security adviser, Michael Flynn.”The biggest political crime in American history, by far!” Trump tweeted, as he shared another tweet from a conservative talk radio host who said “the outgoing president used his last weeks in office to target incoming officials and sabotage the new administration.”He did not provide details in the tweet, which was among 126 he wrote or shared from others on Sunday — Mother’s Day — including many from conservative commentators — his third-highest number of tweets and retweets in one day, according to the data analytics company Factba.se.Early Tuesday morning, Trump tweeted that “OBAMAGATE makes Watergate look small time!”In an interview Tuesday morning on ABC’s Good Morning America, presumptive Democratic presidential nominee and former Vice President Joe Biden said “this is all about diverting attention.”“Can you imagine any other president of the United States focusing on this at the moment when a country is just absolutely concerned about their health, the health of their children, the health of their families?” Biden told ABC News Chief Anchor George Stephanopoulos.“We have an economic crisis, we have a health crisis,” Biden said. “This is all about diverting attention. Focus on what’s in front of us. Get us out of this, Mr President.”White House press secretary Kayleigh McEnany said in response that the way the FBI treated Flynn as it questioned him “should trouble each and every American.””It is not a distraction to bring this up,” McEnany said during an interview Tuesday morning with Fox News.“’Obamagate,’” Trump said at a news conference Monday. “It’s been going on for a long time. It’s been going on from before I even got elected. And it’s a disgrace that it happened.”Asked by a reporter exactly what crime he was accusing Obama of committing, Trump would not say.”You know what the crime is,” Trump told the reporter from The Washington Post. “The crime is very obvious to everybody. All you have to do is read the newspapers, except yours.”Obama on Friday during a private conversation with former members of his administration said that he had concerns with how the Justice Department had moved to drop its case against Flynn, according to an audio recording obtained by Yahoo News.”Our basic understanding of rule of law is at risk,” Obama said, according to the recording. “And when you start moving in those directions, it can accelerate pretty quickly as we’ve seen in other places.” Copyright © 2020, ABC Audio. All rights reserved.