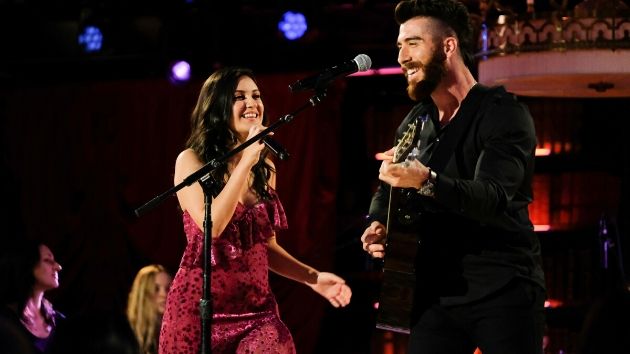 (LOS ANGELES) — On Monday’s penultimate episode of The Bachelor Presents: Listen to Your Heart, the final four couples — Bri and Chris, Jamie and Trevor, Rudi and Matt, and Natascha and Ryan — take their relationships and performing talents to Las Vegas, traveling in style on their own luxury tour buses.

The couples perform for this week’s panel of celebrity judges: Bachelor couple Arie and Lauren Luyendyk Jr., music power couple Ashlee Simpson-Ross and Evan Ross, and Train front man, Pat Monahan, who decide which couples move on to the finals and have their romantic and musical dreams come true.

However, when they get to their hotel suite in Vegas, one couple is missing — Rudi and Matt, who have decided to “take matters into [their] own hands,” with an overnight stopover at a roadside motel in California.  Their goal is to “break down some walls” and “see if there’s something deeper” to their relationship.

The others are concerned about their friends, until they are interrupted by the first date card for Chris and Bri.  The lovebirds are shuttled to a tiny Las Vegas wedding chapel, where they’ll serenade another happy couple exchanging their vows with Ben E. King’s “Stand by Me.”

Meanwhile, Matt and Rudi arrive in Vegas, where Matt confides to Ryan that he likes Rudi, but doesn’t know if he’s “there yet.” Rudi, on the other hand, tells Jamie that she’s falling in love with Matt, but is scared to tell him, fearing he may not feel the same.

Next, Jamie and Trevor are taken to an empty arena that is set up for a hockey game, giving Trevor a chance to share his passion for the sport with her.  After revealing to her that he takes the “L” very very seriously and will only say it if he truly means it, Jamie puts her heart on the line by telling Trevor she’s falling in love with him.  She’s elated to hear him say that he’s falling in love with her too.

Back now to Matt and Rudi, whose date features an invitation to join reggae artist Shaggy onstage to sing backup on his hit “It Wasn’t Me.”  Like Jamie, Rudi’s ready to tell Matt she’s falling for him, but her declaration of love is met with silence.

Natascha and Ryan’s date finds them letting off steam by using heavy construction equipment to crush cars. The two agree that their relationship is just casual at this point, and they are satisfied with that.

The first performance features Chris and Bri singing Elvis Presley’s “I Can’t Help Falling in Love.”  Lauren Luyendyk thought the performance was “adorable” and “super cute,” while her husband Arie “saw hearts” coming out of their eyes. The other judges agreed.

Trevor and Jamie — the later of whom felt a burst of confidence following their earlier date, followed with Lady Antebellum’s “Just a Kiss.”  The judges could feel the passion as well, including Pat Monahan, who said that despite Jamie looking “nervous and kind of awkward,” he thought it was “real.”

Ryan and Natascha took some liberties with Ed Sheeran’s “Perfect,” giving it a little bit of a dance groove. Monahan questioned Ryan’s decision to play the guitar, making it difficult for the couple to get close to each other and thus appear as though they were giving “two separate performances.”  The other judges also felt a disconnect between the two.  Natascha puts the blame on herself, admitting she threw off the performance by messing up one of the verses.

That left Rudi and Matt, who, weren’t in a great place heading into the performances. Despite that, Rudi, addressing the camera, says her feelings for Matt haven’t changed and is determined not to give up on him. The two are appropriately given “Shallow,” Lady Gaga and Bradley Cooper’s song from the movie A Star Is Born, to perform and nail it. Ashlee could “feel the heat.” Monahan praised the performance as well, calling it “magical.”

Afterwards, Jamie and Trevor, Rudi and Matt and Bri and Chris are headed to the finals.

Natascha and Ryan, unfortunately, head home.  However, the news isn’t all bad, as the two vow to continue as a couple regardless, hopeful that something even better awaits them down the road.

The Bachelor Presents: Listen to Your Heart season finale airs Monday at 8 p.m. ET on ABC.