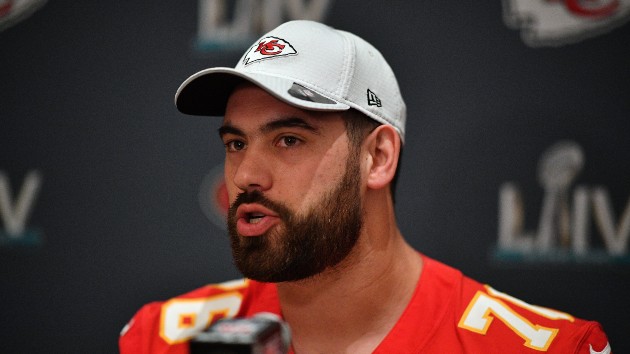 By NICK COULSON, JENNIFER PEREIRA and ANGELINE JANE BERNABE, ABC News(NEW YORK) — Laurent Duvernay-Tardif is known as an offensive lineman for the Kansas City Chiefs, but the NFL Player has swapped his football jersey for scrubs to help out on the front lines of the coronavirus pandemic. Laurent, who is the only active NFL player with a doctorate in medicine, rushed back to Quebec, his hometown, just weeks after he and his team took home the Super Bowl title, to help at a long term care facility. “We were put in isolation for 14 days. And during that time, I was kind of like trying to figure out, like how can I help?” Laurent told ABC News’ Good Morning America.At the long term care facility, Tardif does a little bit of everything as an orderly and has been working three to four shifts a week.“So far, I’ve been assigned to administration of medication in the morning,” he said. “I try to do a little bit of like caring, but not necessarily treating people — just spending time with them.”On top of his time as a health care worker, Laurent is also still virtually training with the Chiefs, who have been supportive of his work. “We’re in a really competitive business. And for them to realize that, you know what’s happening right now and the opportunity I have to contribute and help is bigger than, you know, one virtual workout that I might be missing. I think it’s huge,” he said of his team.“I want to be positive,” he added. “I want to play at a stadium in front of 80,000 people. The reality is I don’t know what’s going to happen. And we still don’t know enough about the disease and how it’s going to be in order to make a call.”Laurent, who has no intention of quitting football, said that whenever football returns, he’ll be ready to protect his teammates — including the Chiefs’ new draft pick, running back Clyde Edwards-Helaire, who is also French-Canadian, just like him. “I heard he might be speaking French so I’m really excited we’re going to do some trash talking in French on the sidelines,” he joked. “We’re going to be unstoppable.” Copyright © 2020, ABC Audio. All rights reserved.