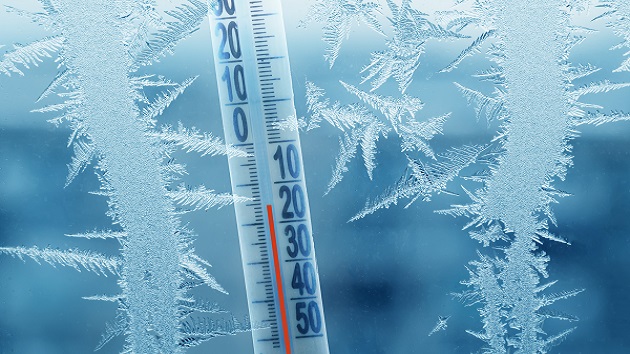 (NEW YORK) — A significant blast of cold air is still making it feel like winter across parts of the eastern U.S. this morning.While there will be some improvement in temperatures during the day today another blast of cold winter like air is on the way for parts of the Midwest on Monday and northeast on Tuesday.Saturday’s low temperatures were quite impressive in parts of the eastern U.S. State College, Pennsylvania, dropped to 27 degrees which ties a record low for the entire month of May. Binghamton, New York, dropped to 24 degrees which is a new low temperature record for the month of May. Indianapolis dropped to 27 degrees on Saturday morning which also broke their low temperature record for the month of May.The cold air also brought some interesting precipitation across parts of the Northeast on Saturday. A trace of snow was reported in Central Park in New York City which tied their record for latest snow. During the day, squalls of precipitation moved through the Northeast with some of the squalls containing snow, some of the squalls containing graupel, and some of the squalls containing both precipitation types.This morning is another cold morning across parts of the eastern U.S. as more record lows will be possible this morning from Massachusetts all the way down the East Coast to Georgia and me a few records as far west as Arkansas.Luckily the wind is calming down in the Northeast but a few gusts are still driving wind chills in the 20s and low 30s for parts of the region, including the big cities from Washington, D.C. to New York City to Boston. Simply put, it is quite remarkable that it is feeling this cold in May with just about two weeks until Memorial Day.Meanwhile in the Midwest, a fast moving system will bring just a little bit of snow to parts of Minnesota and Wisconsin this morning. That storm will help bring some strong storms to parts of Kentucky, Ohio and Michigan later today. Gusty winds will be the main threat, along with small hail.The good news is that the storm should usher in some warmer air out ahead of it and bring temperatures into the 60s for parts of the eastern U.S. this afternoon.By Monday morning, some rain will be moving into the Northeast and we could see some strong thunderstorms in parts of New England during the day on Monday.However, and unfortunately, yet another cold blast is coming in right behind this storm. Wind chills on Tuesday morning could be 20s and 30s once again from Minnesota to the Northeast. Once again it is quite remarkable to see these type of wind chills at this point in May.Record low temperatures will be possible in parts of the Great Lakes and Mid-Atlantic on Tuesday morning, including airport locations near New York City, like Newark, LaGuardia and JFK.For those not a fan of the cold air, there is some good news. The waves of colder air have temporarily suppressed severe weather for a couple days, including a usually active time period for tornadoes in the Plains. The other bit of good news for some is that there are subtle indications that the pattern will change for the second half of the month with perhaps better chances for spring-like weather. Consequently, that will likely bring back the chances for severe weather as well.In the West, warm and hot air remains the dominant weather headline with some records broken on Saturday. Seattle hit 86 degrees breaking their old record of 83 from just last year and Portland hit 87 degrees which broke the old record of 86 set in 1987.A couple of records might be possible in the Northwest today, with temperatures getting into the mid-80s. Seattle is going for 84 degrees today with their record being 86 degrees.Copyright © 2020, ABC Audio. All rights reserved.