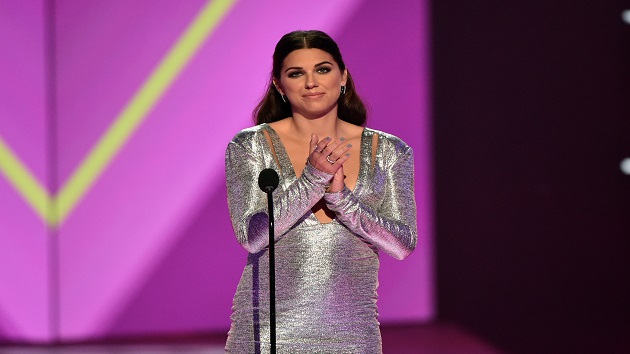 (NEW YORK) — Soccer star Alex Morgan is a mom.The U.S. women’s national team co-captain and her husband, soccer player Servando Carrasco, welcomed a daughter, Charlie Elena, on May 7.Morgan shared a photo of the new arrival on Instagram, saying she was born at 11:30 a.m. and weighed in at 8 pounds, 5 ounces.

At 1130am on May 7 weighing 8lbs5oz, Charlie Elena Carrasco made her grand entrance into the world. She made us wait longer than expected, but I should have known she would do it her way and her way only. My super moon baby.

“She made us wait longer than expected, but I should have known she would do it her way and her way only. My super moon baby,” Morgan wrote.A cavalcade of her teammates, including Mallory Pugh, Abby Dahlkemper, Morgan Brian, Lindsey Horan, Sydney Leroux and Rose Lavelle, congratulated her on the baby in the comments. Baseball great Alex Rodriguez, basketball Hall of Famer Steve Nash and Olympic swimmer and two-time gold medalist Simone Manuel also got in on the congrats.Morgan, 30, and Carrasco, 31, married in 2014 and announced last year that they were expecting a baby girl. She told “Good Morning America” in February that “taking a step back from soccer” while pregnant was “a little different” for her, but added, “I am enjoying it.””I hope that she’s born into a world that she can accomplish much bigger and better things that I’m ever capable of,” Morgan said.One issue that’s important to Morgan has been pay equity for women. She and her USWNT co-captain Megan Rapinoe told “Good Morning America” on May 4 that the team plans to appeal a federal judge’s decision to throw out their unequal pay claim in the more than $66 million lawsuit they filed against the United States Soccer Federation. The women’s national team won the World Cup in 2015 and 2019, and last won the Olympic gold in 2012. The 2020 Tokyo Olympic Games have been postponed due to COVID-19 concerns until at least 2021.”This decision was out of left field for us. I think for both sides it was very unexpected,” Morgan said. “If anyone knows anything about the heart of this team, we are fighters and we will continue to fight together for this.”Copyright © 2020, ABC Audio. All rights reserved.

Voting rights legislation across country looks to both restrict, expand access
County apologizes for seniors having to wait outside in cold for COVID-19 vaccine
COVID-19 ‘long-haulers’ trying to decode lasting symptoms a year after falling ill
US Army changes standards for women to allow ponytails, nail polish, breastfeeding
Cloris Leachman, Oscar and Emmy winning star of ‘The Mary Tyler Moore Show’, dead at 94
Netflix sends fans a thank you after ‘Bridgerton’ officially becomes its biggest original series ever