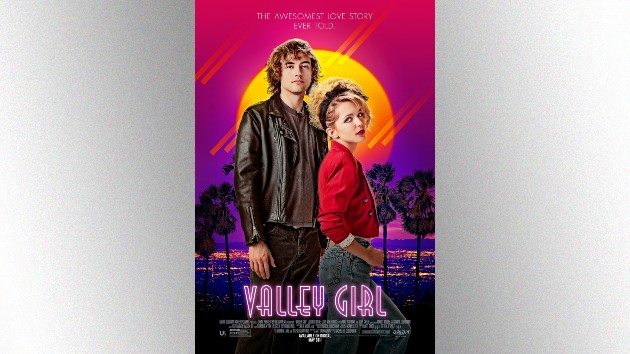 (HOLLYWOOD) — The beloved 1983 movie Valley Girl, featuring a young Nicolas Cage, told the story of star-crossed love between a privileged girl from California’s San Fernando Valley and a Hollywood punk rocker.  It’s now been rebooted as a totally ’80s musical, which debuts Friday on digital and in select drive-in theaters.

Besides the addition of singing and dancing — to classic ’80s hits by Madonna, A-ha, A Flock of Seagulls, The Cars and more — the remake has added a twist: The story unfolds as a flashback, which starts when a present-day mom named Julie, played by Alicia Silverstone, tells her teenage daughter the story of her first big romance.

“The mother-daughter arc that is now in the film is really beautiful and…kind of adds a different element, and also maybe broadens the appeal for a different type of viewer,” says Jessica Routhe, who stars as teenage “Val,” Julie.

But starring in a remake of a beloved movie is a tall order, as Jessica and co-star Joshua Whitehouse — who plays punk rocker Randy, the role originated by Nicolas Cage — admit.

“Obviously, Nicolas Cage is big boots to fill,” says Joshua. “So I wanted to pay some homage to it, but make it my own as well.”

“I felt so much gratitude to the original film and wanted to make sure that we were being respectful of it and all of the people who created it. So it felt really important to take inspiration from it, but not just directly copy,” says Jessica.

Need another reason to make Valley Girl part of your weekend viewing?  Jessica says, “With everything that’s going on right now and how crazy everything is, what’s better to watch than some awesome neon ’80s, cotton candy, love, joy?”

“No one is safe. Not one of you.”: Johnny Depp decries ‘cancel culture’
Ray J responds to rumors of a second sex tape with Kim Kardashian: “This ain’t cool”
Is It Time To Go All-In On The Raiders?
Brian Laundrie search presses on as death of Gabby Petito ruled homicide: Live updates
Chelsea Handler has a new boyfriend
Smaller COVID vaccine doses may protect children as well as full doses in adults: Pfizer