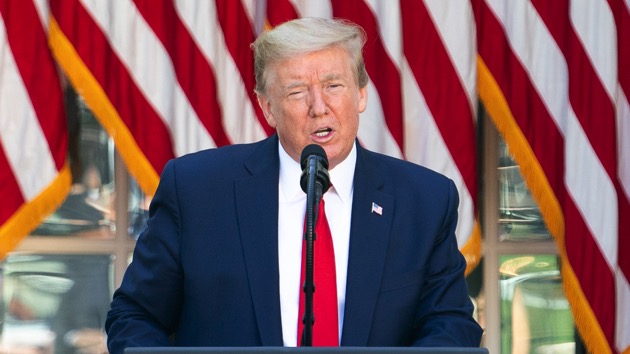 By ABC NEWS(WASHINGTON) — President Donald Trump on Friday downplayed April’s 14.7% unemployment rate amid the coronavirus pandemic, claiming that “those jobs will be back and they’ll be back very soon.”“It’s fully expected, there’s no surprise, everybody knows this,” he told Fox and Friends.Trump also said he will “probably” have an antibody test for the coronavirus. It was revealed Thursday he had tested negative for the virus after contact with a military service member who had tested positive — a personal valet who had brought him Diet Cokes in the Oval Office.Trump said he had contact with the valet on Tuesday. He’s said he will now get daily testing, even as he’s rejected as impractical similar testing for Americans he’s encouraging to go back to work.Here are Friday’s most significant developments in Washington:Trump plays down worst unemployment numbers since Great DepressionPresident Trump reacted on Fox and Friends to the latest jobs numbers soon after they were released this morning, downplaying the devastating figures.He sought to deflect any blame that could be assigned to him as president and expressed optimism for an economic comeback.“It’s fully expected there’s no surprise, everybody knows this. Somebody said ‘oh, look at this.’ Well, even the Democrats aren’t blaming me for that but what I can do is I’ll bring it back,” Trump said.The president continued to hit his message that the country has to view themselves as “warriors” and get back to work, optimistically predicting a strong comeback.“Those jobs will all be back and they’ll be back very soon and next year we’re going to have a phenomenal year. People are ready to go. We’ve got to get it open. People are ready to go,” he said.Defending his own performance, Trump said: “We were the envy of the world, and then they came in and they explained it and they said sir, you have to turn it off. We have to close the country, and I said ‘Say it again.’ They said, ‘sir, you have to close the country.’”– ABC News’ Jordyn Phelps and Ben GittlesonTrump reveals new details about contact with infected personal valetIn his “Fox and Friends” interview, President Trump said her personal valets have “already started” wearing masks.He said the valet who tested positive for coronavirus “was in the room” on Tuesday, although it wasn’t clear whether he meant the Oval Office where it’s been reported the man brought the president his Diet Cokes.”This was a gentleman, very good guy, but he was, I guess, off for three or four days, and then he was off over the weekend, and off on Monday, and on Tuesday, he was in the room, and very virtually, I don’t think any contact, but he was in the room, and then I went to get tested, and I tested fine, ” Trump said. “You know, negative, I guess you’d say, negative, and then I got tested a second time, and I tested negative, so — and Mike Pence likewise, because Mike would be there sometimes, you know, when he’d walk in. But he was not there for a while, and he’s a fine young guy, so it’s just one of those things.”He added that the valet had been tested “four days before.”President Trump now gets daily coronavirus testing but one test he said he has not had, at least not yet, is an antibody test.“No I haven’t but we’re getting that…I will do that…at some point probably soon I will be,” Trump said, suggesting he will be getting an antibody test in the future, though he offered no details on when that might happen.The president added that he’s tested “a lot, that’s for sure.Asked if he would send a rapid COVID-19 testing device to Biden if the former vice president and presumed Democratic presidential nominee asked for one, Trump said he would.”Yes, 100 percent,” Trump said. “I’d love to see him get out of the basement so he can speak, because he’s locked in a basement somewhere, and he — every time he talks, it’s, like, a good thing… They don’t want him to come out,” he claimed.”I’ll give them the test immediately. We would have it to them today. Nobody’s ever asked me for the test. I mean, if somebody asked, I would make sure that one of the Abbotts…” — he went on to describe the Abbott rapid testing devices. “We would have them a machine or two today if they needed it.”– ABC News’ Jordyn Phelps and Ben GittlesonTrump doesn’t wear mask at ceremony with WWII veterans in their 90sPresident Trump, along with first lady Melania Trump, marked the 75th anniversary of VE Day by visiting the World War II Memorial with seven veterans of the historic conflict.Masks were NOT worn by the president, first lady or the veterans who are all in their 90s, the group health experts have said are the most at risk for death due to coronavirus.The president and first lady kept a few feet of distance between themselves and the veterans as they greeted the veterans.At her Friday briefing afterward, White House press secretary Kayleigh McEnany told reporters, all wearing masks, that it was the president’s choice whether to wear a face covering and it was the veterans’ decision to attend the event.“This president is regularly tested,” she said. “This president will make the decision as to whether to wear a mask or not. I can tell you that those veterans are protected. They made the choice to come here because they’ve chosen to put their nation first.”They wanted to be with their commander in chief on this momentous day and it was their choice to come here and I can tell you that the president always puts the safety of our veterans first and of the American people first,” she said. — ABC News’ Elizabeth Thomas and Ben GittlesonCopyright © 2020, ABC Audio. All rights reserved.