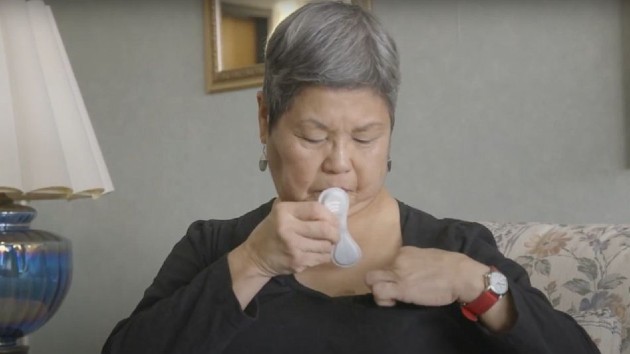 By MIKE LEVINE, ABC News(WASHINGTON) — The Pentagon is working with a prominent technology company to use body-worn sensors to identify Americans infected with the novel coronavirus even before symptoms start to appear.The nascent project, funded by the Defense Health Agency and organized by the Henry M. Jackson Foundation (HJF), also hopes to accurately predict which patients are likely to contract severe disease, according to a press release from physIQ, the Chicago-based company behind the effort.”The second wave (of the pandemic) is going to come this fall. I’m already hearing people talk about, ‘How do I bring my employees back?"” Gary Conkright, physIQ’s founder and CEO, told ABC News. “We think we’re working on a solution to that.”Federal officials handling the government’s pandemic response privately began eyeing the Pentagon-backed effort early last month as a possible new weapon against COVID-19. The initiative was touted on an internal conference call that included Federal Emergency Management Agency chief Pete Gaynor and other senior U.S. officials.Here’s how the physIQ technology works: Each patient attaches an electronic sensor to their chest or wrist. The sensors measure vital signs in infected patients, and that data is continuously relayed back to physIQ, whose self-described “artificial intelligence systems” then identify changes in the body and likely indicators of infection.Conkright said he expects to know in a matter of months whether his company’s technology can accurately predict COVID-19 infections in people not showing symptoms. A significant portion of those infected with the virus never become symptomatic at all, according to medical experts.”There is a great likelihood that we’re going to detect these infections,” Conkright said his researchers have told him.But, he added, the “best application” for his company’s technology would be for patients who already know they’re infected.”You can be monitored at home by your doctor, and he or she will know before you do that you need to come in and be taken care of,” Conkright said.HJF and physIQ have already begun enrolling patients from military hospitals across the country, aiming to ultimately track thousands of patients and others they may have exposed to the disease, including frontline health care workers, according to the press release.The public announcement on Thursday comes as continued shortages of testing kits across the country still hamper efforts by U.S. authorities to understand the full scope of the COVID-19 pandemic and stop its spread inside the United States.”Physiologic monitoring could potentially provide early indication of infection, which could help to target testing to individuals most likely to be infected,” the HJF’s Dr. Danielle Clark told ABC News.On Monday, the U.S. Army began soliciting additional bids for contracts totaling $25 million to develop wearable coronavirus detectors, according to the military newspaper Stars and Stripes.The Army hopes to award up to 10 contracts in the coming weeks, the paper reported. It’s unclear exactly how much the Pentagon is spending on the physIQ and HJF project, but it’s likely to cost tens of millions of dollars.Meanwhile, other researchers and firms have announced similar efforts.Northwestern University announced on Monday that researchers there, in conjunction with Shirley Ryan Ability Lab in Chicago, have developed a wearable device to collect data and created “a set of data algorithms specifically tailored to catch early signs and symptoms associated with COVID-19.”With researchers and doctors in “desperate need for more data” about COVID-19, about 25 patients have begun using the devices, which are placed on a patient’s throat to monitor coughing and respiratory activity, according to a press release on Monday.”These sensors have the potential to unlock information that will protect frontline medical workers and patients alike — informing interventions in a timely manner to reduce the risk of transmission and increase the likelihood of better outcomes,” Arun Jayaraman, a research scientist at the Chicago lab, said in the press release.HJF, which works to advance military medicine, and physIQ have previously joined forces to fight infectious diseases.In 2014, physIQ and HJF worked with the U.S. Agency for International Development and the Centers for Disease Control and Prevention to fight the emerging Ebola crisis, according to Conkright.After analyzing quarantined patients in West Africa, the effort confirmed that PhysIQ and others could remotely monitor people — even from across the Atlantic Ocean — with “high enough fidelity” to accurately predict infections, Conkright said.”We are … striving to rapidly translate those novel tools and strategies for the COVID-19 pandemic,” Clark said. Copyright © 2020, ABC Audio. All rights reserved.