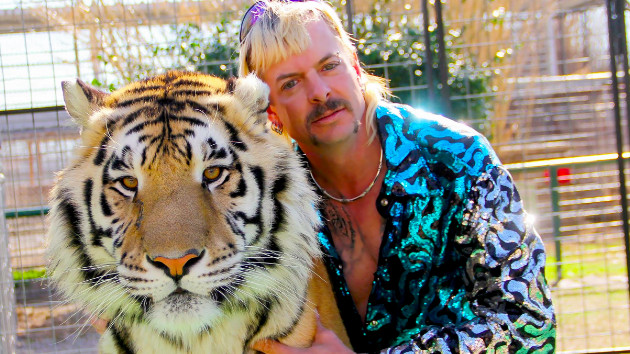 (OKLAHOMA) — Tiger King star Joe Exotic is pulling all the stops to make sure he walks free once more.

Exotic, born Joseph Schreibvogel, was found guilty for hatching a murder-for-hire plot against his arch-enemy Carole Baskin… a crime he says he didn’t commit.

The president previously joked on April 8 that he might pardon the Netflix star for the memes “and just for frankly watching the media reaction to this thing.”

Now emboldened that there may be a chance, TMZ reports that Exotic plans to send his case file directly to the president and, to sweeten the deal, roll out with a flashy moving billboard to drum up support and attention.

Exotic’s team decorated a black and white bus with a wraparound sign that reads “President Trump please pardon Joe Exotic” — complete with a blown up picture of Joe’s face and a tiger.

The former Oklahoma zoo owner is currently serving a 22-year sentence for his murder-for-hire plot, where the prosecution claims he paid Allen Glover $3,000 to eliminate Baskin.

As for Exotic, he maintains that he fed Glover the large sum of money in order to make him leave his zoo’s grounds.

Whether or not President Trump believes Exotic or lets him walk free has yet to be seen.