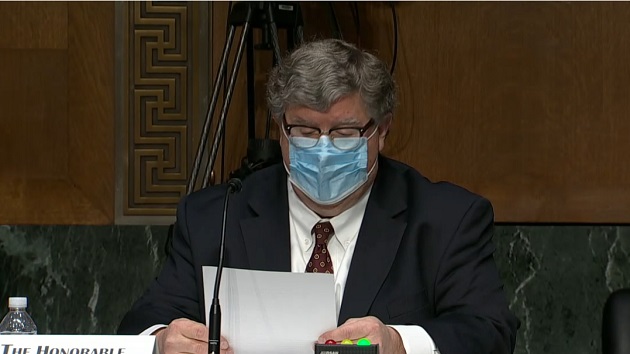 (WASHINGTON) — BY: ALLISON PECORINWith the Senate back in session, the Capitol would normally be bustling with lobbyists, lawmakers and members of the public, but everything looks different as the politicians, staffers and reporters take precautions amid the coronavirus pandemic.Offices have pared down their staffs, decals on the floors remind everyone to keep at least 6 feet apart and the hallways are vacant as members and other staffers respect social distancing guidelines in a place designed for interaction.Perhaps the most noticeable change is the wide use of face masks as people move about the complex. When senators last met for legislative business in March, the Centers for Disease Control and Prevention had not yet recommended that face masks be worn in public places.The CDC recommendations did not stop some fashion statements.Speaker of the House Nancy Pelosi wore a pink suit and matching pink face mask on Tuesday for the swearing-in ceremony for Rep. Kweisi Mfume, D-Md. Mfume won the special election to fill the seat left vacant by the late-Rep. Elijah Cummings.Sen. Llamar Alexander, R-Tenn., was spotted heading to GOP lunch in a face mask featuring his signature plaid.Though not necessarily as coordinated, other rank-and-file members of Congress are also donning masks, with security guards and staff members following suit. On Tuesday, the Senate took up its first major committee business as the Senate Intelligence Committee held a hearing to consider the nomination of Rep. John Ratcliffe to serve as the director of national intelligence.Senate confirmations, especially for nominees as controversial as Ratcliffe, are usually bustling affairs. Members of the public are invited to watch the hearings and often form long lines that snake through the hallways of the Capitol office buildings, but members of the public are still not permitted on the Capitol complex.Ratcliffe was escorted in by Capitol police officers wearing face masks. Ratcliffe himself wore no face covering.The confirmation hearing was the first glimpse into what could be the new normal of the Senate.When Chairman Richard Burr began the hearing, he did so before an almost entirely empty room. He had a face mask pulled below his chin as he spoke and a bottle of hand sanitizer sat next to him at the dais.”This hearing will be a little bit different,” Burr said after he gaveled in the proceedings. “It is perhaps the first congressional hearing held during the extenuating circumstances of the pandemic.”Ratcliffe was questioned by members who moved in and out of the committee room. Burr encouraged members to watch the questioning from their offices and to only come to the hearing when it was time for them to ask questions. Senators wiped down the microphones after each use.Outside the committee rooms, signs about social distancing are paired with ones that encourage people to stay home if they’re not feeling well.Some senators questioned whether it is safe for them to be physically present in the Capitol as Washington has not yet hit its projected peak of the novel coronavirus cases and the city’s stay-at-home order remains in effect through mid-May.But Sen. John Cornyn, R-Texas, told reporters Tuesday that he believes the change in atmosphere in the Senate is enough to keep them at work.”I think, if the grocery clerks and the — the nurses and doctors and law enforcement personnel can do their job, Congress can do our job, with appropriate safeguards,” he said. “And, as you can tell, there’s a lot of appropriate safeguards that being implemented.”