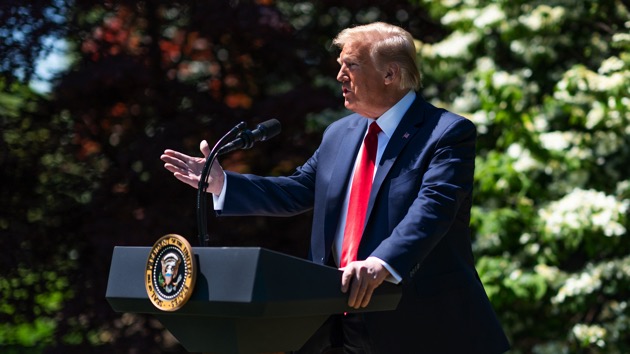 Official White House Photo by Andrea Hanks
Posted on May 5, 2020 by ABC News

By LIBBY CATHEY, ABC News(WASHINGTON) — President Donald Trump on Tuesday headed to the battleground state of Arizona, which is still under a stay-at-home order, to promote his effort to reopen the country and tour a Honeywell facility producing masks — though it’s unclear if he’ll wear one himself.“If it’s a masked facility, I will,” he said as he left the White House.He also downplayed the significance of a key forecasting model used by the White House that now shows the U.S. death toll doubling as states ease restrictions from roughly 70,000 lives in early August to nearly 135,000 by that time.Trump inaccurately claimed that the model doesn’t take into account mitigation measures.On Sunday, the president revised his predicted death toll from 60,000 Americans as the “minimum number” to the death toll “hopefully” remaining under 100,000. The country is on track to hit the president’s prior prediction by the weekend, as more states ease restrictions.The government’s top expert on infectious diseases Dr. Anthony Fauci acknowledged to CNN Monday night that some people may “violently” disagree with his warnings about reopening too quickly but said he has a “moral obligation…based on evidence and experience” to help make safe decisions.”How many deaths and how much suffering are you willing to accept to get back to what you want to be some form of normality sooner rather than later,” Fauci said. “There are people that are going to be disagreeing with me. Some of them, rather violently in many respects, you know, telling me that I’m crazy you know fire Fauci, do this, do that. That’s part of the game.”Here are Tuesday’s most significant developments in Washington:Trump, traveling to Arizona, downplays model with higher death toll As he left the White House for his first major trip in two months, Trump said he was not concerned about a new University of Washington IMHE model forecasting 134,000 deaths by August — taking into account states easing restrictions.“That’s without mitigation, and we will have mitigation,” Trump said, although the model is based on current behaviors in the U.S. “The fact that we are letting people go and go to their jobs, they have to do it. You know, if they held people any longer with the shutdown, you are going to lose people that way, and you already have, I’m sure. But between drug abuse and they say suicide, a lot of different things, there is no win.”He continued to shift his message to reopening the country.“We have to open our country,” Trump said. “Models have been very inaccurate…We did everything right but now, it’s time to go back to work — so I’m going to Arizona.”When asked if he would wear a mask on his visit Tuesday to the Honeywell N95 mask production plant, Trump said he will, “if it’s a masked facility.”Trump also confirmed that Dr. Anthony Fauci will testify before the Senate next week — not the House — he specified.“Dr. Fauci will be testifying in front of the Senate and he looks forward to doing that. But the House, I will tell you, the House should be ashamed of themselves, and frankly the Democrats should be ashamed because they don’t want us to succeed. They want us to fail so they can win an election which they are not going to win,” the president said, before heading to the battleground state of Arizona.NY Post: Trump maintains coronavirus briefings will be back but not daily, says he doesn’t supportIn a multi-part interview with the NY Post conducted Monday, President Donald Trump said the coronavirus briefings will continue, once or twice a week, and that new White House press secretary, Kayleigh McEnany, is “going to be able to do them.”Comparing the task force briefings to rallies, Trump said “everybody” enjoyed watching them and that they generated excitement.”We get a lot of people watching, and it’s the way that you get around fake news. In other words, I have a much bigger audience than anybody’s ever had,” the president said.As the country battles the novel coronavirus pandemic, Trump said he thinks the American people are “starting to feel good now. The country’s opening again. We saved millions of lives, I think,” he added.Shifting to his campaign rallies, Trump said it’s a “big disadvantage” if he can’t keep them back before the election but repeated his hope to do so.”I hope we’re going to be able to get the rallies back before the election,” Trump said. “I actually think it’s very important. I think that would be a big — a big disadvantage to me if we didn’t, if we couldn’t have the rallies back.”Trump also echoed recent remarks by Senate Majority Leader Mitch McConnell, who suggested last month states declare bankruptcy as opposed to taking a federal bailout, a comment the leader later walked back, but the president doubled down on, noting most cases with outbreaks are run by Democrats.”I think Congress is inclined to do a lot of things, but I don’t think they’re inclined to do bailouts. A bailout is different than, you know, reimbursing for the plague,” the president said. “It’s not fair to the Republicans because all the states that need help — they’re run by Democrats in every case. Florida is doing phenomenal, Texas is doing phenomenal, the Midwest is, you know, fantastic — very little debt.” Copyright © 2020, ABC Audio. All rights reserved.