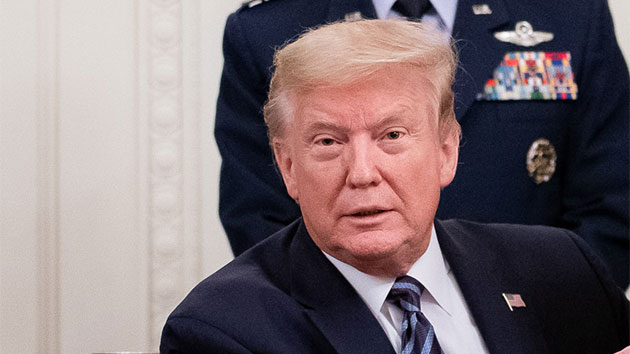 Official White House Photo by Tia Dufour
Posted on May 4, 2020 by ABC News

By JORDYN PHELPS, ABC News(WASHINGTON) — While his top public health experts have cautiously set expectations for the timeline needed to develop a vaccine for the coronavirus at 12 to 18 months, President Donald Trump is bullish that one will be ready to go ahead of schedule.“We are very confident that we’re going to have a vaccine at the end of the year — by the end of the year, have a vaccine,” Trump said during a Fox News town hall Sunday. “We’re pushing very hard.”By his own admission, the president is out ahead of the experts in forecasting the delivery of a vaccine for the American public by December.“Now, the doctors would say, ‘well, you shouldn’t say that,’ I’ll say what I think,” Trump said. “I met with the heads of the big companies, these are great companies. Yeah, I think we’re gonna have a vaccine much sooner rather than later.”The president’s top public health experts have not ruled out the possibility of crossing the finish line ahead of schedule, but they have more cautioned that a vaccine by January is a theoretical, best-case scenario.“On paper, it’s possible. It’s whether we can execute,” White House Coronavirus Task Force Coordinator Dr. Deborah Birx said in an interview on “Fox News Sunday” in setting expectations against the president’s rosy assessment.The government’s top infectious disease expert, Dr. Anthony Fauci, has sought to recast the president’s promise of a December vaccine as generally not far from what he has said all along.“Remember, go back in time, I was saying in January and February that it would be a year to 18 months,” Fauci said in an interview last week with NBC News. “So January is a year. So it isn’t that much off what I had originally said.”The president is putting his faith in an administration initiative dubbed “Operation Warp Speed” under which the federal government will team up with a handful of private drug producers and invest in the development and production of a handful of prospective vaccines that show promise.“The way that it’s possible is if you bring forward five or six different classes of candidates, which the Operation Warp Speed has done. And so it’s not relying on a single vaccine platform. It’s relying on several different candidates that are made differently and act differently. And then it’s about doing compressed phase one, phase two, phase three trials in an overlapping way,” Birx said in explaining the program.The White House has been short on details about the program and who is running the day-to-day operations, even as President Trump insists he’s in control.“You know who is in charge of it, honestly, I am,” Trump said. “I am in charge.”Pressed for details about the program’s operations and budget in her first press briefing on Friday, McEnany offered scant details but told ABC News Chief White House Correspondent Jonathan Karl to “rest assured we’re on an accelerated pace to a vaccine at least for this phase 1 portion of clinical trial.”Even as the president is placing faith in the U.S. government’s efforts, in partnership with private companies, to deliver on the vaccine, he’s said he also wouldn’t mind if another country beat the US to the punch.“I’m going to really say something that is not like me…I don’t care,” Trump said when asked about the possibility that another country will develop a successful vaccine sooner. “I just want to get a vaccine that works. I really don’t care. If it’s another country, I’ll take my hat off to them.”