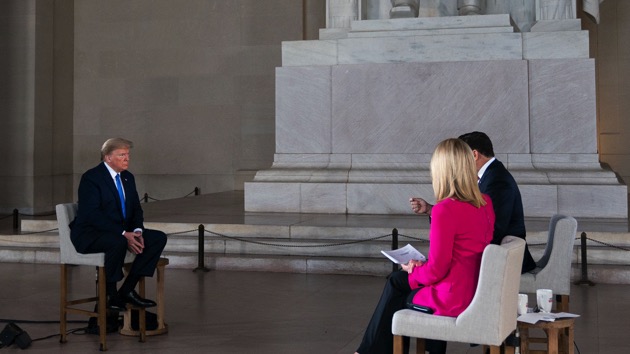 Official White House Photo by Shealah Craighead
Posted on May 4, 2020 by ABC News

By JORDYN PHELPS and BEN GITTLESON, ABC News(WASHINGTON) — It was the second time in two weeks he’s had to concede his prior COVID-19 death toll projections have proven too optimistic — even as he presses to reopen the country.President Donald Trump on Sunday again revised upward his estimate of how many Americans will die from the coronavirus — now saying it could be as many as 100,000 people — even as he sought to take credit for the estimate not being worse than it is.“We’re going to lose anywhere from 75, 80 to 100,000 people. That’s a horrible thing,” Trump acknowledged in a Fox News town hall. “We shouldn’t lose one person over this. This should have been stopped in China. It should have been stopped. But, If we didn’t do it, the minimum we would have lost is a million, two million, four million five. That’s the minimum. We would have lost probably higher than, it’s possible, higher than 2.2.”Just last Monday, the president had said he expected 60 to 70,000 deaths.“If you look at what original projections were — 2.2 million, we are probably heading to 60,000-70,000. It’s far too many. One person is too many for this. And I think we’ve made a lot of really good decisions,” Trump said.But one week later, the president’s estimate is on track to be surpassed, with the current death toll now at more than 67,000 and climbing by the day.It was just two weeks ago, on April 20, that president said he didn’t anticipate the death toll to surpass 60,000.“We’re going toward 50- or 60,000 people. That’s at the lower — as you know, the low number was supposed to be 100,000 people. We — we could end up at 50 to 60. Okay? It’s horrible,” Trump said.In late March, Trump and the White House coronavirus task force said their modeling suggested 100,000 to 240,000 would die in the U.S. even with aggressive social distancing measures in place across much of the country. Dr. Deborah Birx, the White House’s coronavirus response coordinator, said Sunday that estimate remained in place even though the president’s own public projections have proven prone to fluctuation.“Our projections have always been between 100,000 and 240,000 American lives lost, and that’s with full mitigation and us learning from each other of how to social distance,” Birx said in an interview with Fox News Sunday.Trump has also changed his frame of reference for the virus. Initially, he repeatedly compared it to the 2009-2010 H1N1 pandemic, which killed an estimated 12,469 Americans; but then, when the coronvirus’s death toll jumped higher, he took to juxtaposing it with the 1918 influenza pandemic that left around 675,000 Americans dead.The president’s shifting assessments of the public health crisis come as he seeks to redirect focus toward the economic reopening of the country, assuring the country that “you can satisfy both” public health and economic concerns in staking out a path for the country to resume more normal economic functions into the summer, even as the virus is expected to persist.From the start, he has tried to downplay concerns over the coronavirus’s impact, seeking to allay fears as he seeks re-election. In late February, he predicted the number of cases in the United States “within a couple days is going to be down to close to zero.”“I really believe you can go to parks, you can go to beaches, you keep it — you know, keep the spread, you keep — you stay away a certain amount,” Trump said, crediting the public for doing an “incredible” job in social distancing. “That’s one of the reasons — if you call losing 80 or 90,000 people successful, but it’s one of the reasons that we’re not at that high end of the plane as opposed to the low end of the plane.”But while the president speaks of striking the right balance in championing a resumption of normal life, he does so from the sidelines, since he has left state and local authorities in control of making their own decisions.The president has been critical of strict measures adopted by Democratic Michigan Gov. Gretchen Whitmer and has sought to sympathize with demonstrators who have protested stay-at-home orders across the country.“I think a lot of people want to go back. They just want to go back. You see it every day. You see demonstrations all over the country and those are meaningful demonstrations,” Trump said.But Birx has struck a far more somber tone in response to demonstrations like those in Michigan, where hundreds crowded into the Capitol building, some without masks and still others carrying weapons, warning that their actions could have deadly consequences.“It’s devastatingly worrisome to me personally, because if they go home and infect their grandmother or their grandfather who has a comorbid condition and they have a serious or an unfortunate outcome, they will feel guilty for the rest of our lives,” Birx said.As the president calls for the country to get back to work, he too is set to resume some sense of normalcy with the resumption of official travel.On Tuesday, Trump is set to travel to Phoenix, Arizona, to tour a Honeywell plant that has employed 500 people to manufacture N95 masks that have been in short supply and serve as a critical piece of personal protective gear for frontline healthcare workers.The president traveled to Camp David this past weekend, but prior to that, hadn’t set foot of the White House grounds since March 28, when he traveled to Norfolk, Virginia, to see off a military hospital ship bound for New York City.Copyright © 2020, ABC Audio. All rights reserved.