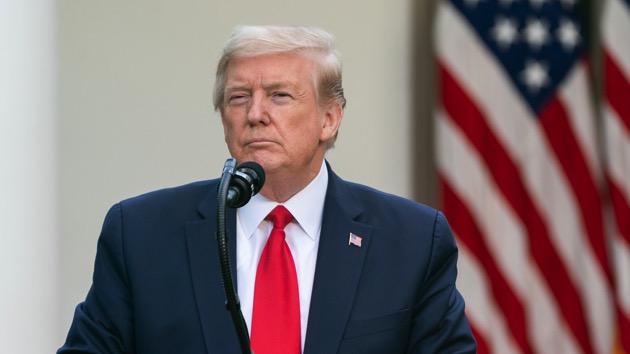 Official White House Photo by Andrea Hanks
Posted on May 4, 2020 by ABC News

By LIBBY CATHEY, ABC News(WASHINGTON) — As he prepares to travel across the country to Phoenix Tuesday, and with Monday another day without a coronavirus task force briefing, President Donald Trump is continuing to use other venues to highlight what he insists is his administration’s strong response to the deadly pandemic.Yet, even as he pushes for the country to reopen, he conceded Sunday that the U.S. death toll may reach 100,000 lives, as opposed to the roughly 60,000 “minimum number” he has touted as a success.”I’ll tell you one thing. We did the right thing and I really believe we saved a million and a half lives,” Trump told Fox News during “virtual” town hall at the Lincoln Memorial. “It is horrible to go through, but it is working out.”Despite the rising death toll, Trump pressed for governors to speed up reopening, saying, “Some states, I think, frankly, aren’t going fast enough.” Half the states eased some guidelines over the weekend.Within feet of the iconic statue of Lincoln appearing to look down on him as he spoke, Trump complained that despite what he calls his successes, he’s been treated worse than the assassinated president.He also said Sunday that he believed a vaccine could be available by year’s end — something many health experts say is necessary before the nation can safely reopen in full.Even as cases in Washington continue to rise, the Senate reconvenes Monday, and lawmakers are supposed wear masks and take other social distancing precautions. The standoff over liability protections and fight over aid to state and local governments continues.Here are Monday’s most significant developments in Washington:Mnuchin says $175B of Paycheck Protection Program money usedTreasury Secretary Steven Mnuchin, in a phone interview with Fox Business Monday, said that $175 billion of the second tranche of money allocated to the Paycheck Protection Program has been allocated and that there have been 2.2 million loans at an average size of $79,000.He acknowledged there were some hiccups with the system but said they “couldn’t be more pleased” with the impact, with 60 million set to benefit.The fund is more the half way spent.Asked about the potential for international travel to restart later this year, Mnuchin said it’s “too hard to tell at this point” when international travel will restart but encouraged Americans to plan domestic trips.”This is a great time for people to explore America,” Mnuchin said.SCOTUS holds its first oral argument via teleconferenceThe U.S. Supreme Court on Monday is livestreaming its first-ever telephonic oral argument, a high-stakes endeavor prompted by the historic disruption to court operations during the coronavirus pandemicMillions of Americans will for the first time be able to experience the nine justices together at work — a virtual civics lesson on an entire branch of U.S. government that conducts most of its work out of the public eye.It’s also the first opportunity for a sitting American president — one who is party to cases before the court — to tune in live and potentially respond via Twitter.The high court will hear 10 cases by phone over the coming weeks.Urgent deadlines in several cases, including President Trump’s appeal of subpoenas for his financial records — which expires at the end of the year — required the court to devise a new way of doing business in the near term.FDA revises policy on antibody testsThe Food and Drug Administration has updated what is required to start using antibody tests.It says early on they allowed more flexibility for labs to use their own antibody tests because that was necessary.Now they want labs and companies to seek emergency authorization and provide validation that their test works within 10 days of starting.Under this revised policy, the FDA has outlined the following expectations for antibody test developers:”Commercial manufacturers will submit EUA (emergency use authorization) requests, with their validation data, within 10 business days from the date they notified the FDA of their validation testing or from the date of this policy, whichever is later. Furthermore, the FDA has provided specific performance threshold recommendations for specificity and sensitivity for all serology test developers,” the statement released Monday said.Copyright © 2020, ABC Audio. All rights reserved.