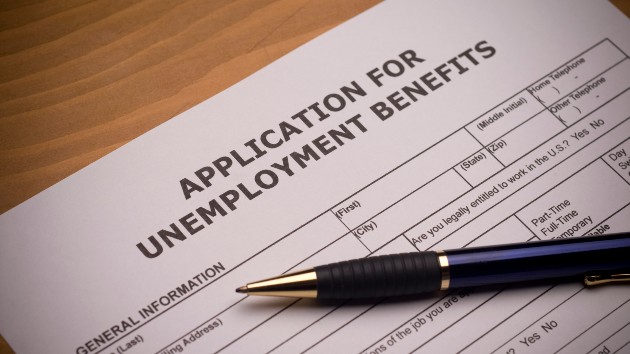 By VICTOR ORDONEZ, ABC News(NEW YORK) — For most, the first day of the month marks bills due — banks expect mortgage payments and landlords expect rent. But for the millions of newly unemployed Americans, paying bills has become a desperate and strategic endeavor amid the coronavirus pandemic.”I’ve had no choice but to cash out my 401(k) so I can pay my bills come May 1,” said Martha Middleton, a former head cashier at a Lowe’s in Las Vegas. “This is a difficult decision I’ve had to make, but I’ve been left no choice.”Middleton says she filed for unemployment with Nevada’s Department of Employment, Training and Rehabilitation over a month ago: “I check every day, and it says, ‘pending resolution.'”Over 30 million Americans have applied for unemployment since March 15. As seen in Middleton’s case, this number does not reflect the number of Americans who have received an unemployment check — some claim they’ve been “pending” as long as six weeks.Florida’s state labor department has received 1.8 million unemployment applications since March 15 and has verified over 900,000 of them. As of Wednesday, just over 400,000 of those applicants have received benefits — about 23% of the total applications submitted, according to the department.Several of the Floridians and Nevadans who spoke with ABC News said they found it “nearly impossible” to get in touch with their respective labor departments to check on the status of their applications.Rechelle Bradford, who worked as a passenger servicer for a helicopter company that tours the Grand Canyon, applied for unemployment on March 17. She’s yet to hear any update from the DETR.”I have no money to pay my rent, lights and other bills I have and I’m tired of being scared of not being able to provide for my kids, I’m beyond desperate,” said Bradford. When asked which payment takes priority if and when her unemployment benefits come in, she didn’t hesitate.”Rent — I would rather have a roof over our heads and be in the dark,” Bradford told ABC News. “I feel safer in these four walls than I would living on the street.”In the first four days of April, nearly one-third of U.S. apartment renters did not pay rent, according to data collected by the National Multifamily Housing Council. By April 26, however, the NMHC data showed that 91% of renters ended up paying April’s rent.”So the initial take here is that people found resources, they took their rent seriously,” said Doug Biddy, president and CEO of NMHC, adding that regardless of whether their states suspended evictions, residents continued to prioritize shelter and credit score in April.However, Biddy is wary of predicting a similar outcome in May if states continue to delay unemployment benefits.”The sporadic and spotty and diverse unemployment claims experience in the different states means tons of households still haven’t gotten their payments,” Biddy said. “And so we are girding for a tougher May, for sure.”Rent strikes hit cities across the nationStarting Friday, tenants in Los Angeles, New York and Philadelphia are participating in what could be the largest coordinated rent strike in nearly a century.”I’ve spoken with many folks in my building who are not able to pay rent, who actually have no income coming in at all,” said Teadoro Carbajal, who was laid off from his restaurant job due to coronavirus. “And it is not that they don’t want to pay, it is just that they can’t.”Carbajal is a tenant leader representing one of at least 400 hundred families who live in New York City buildings containing over 1,500 rental units. Each is coordinating building-wide rent strikes, according to Cea Weaver, campaign coordinator for Housing Justice For All, a New York-based coalition of tenants and housing activists.April also saw a spike in forborne mortgages. As of April 23, more than 3.4 million homeowners — or 6.4% of all mortgages — had entered into COVID-19 forbearance plans, according to BlackKnight Inc.”These record unemployment rates are the number one driver behind whether you’re able to make your mortgage payment,” said Andy Walden, director of market research for BlackKnight Inc. “It is all about whether or not you have a check coming in the door.”

‘Pending’ unemployment applicants find community onlineBradford and Middleton are both members of a Facebook group called “Las Vegas Unemployment Solutions,” created by fellow Nevadan Adrian Camacho.Camacho was laid off from a Las Vegas bar due to the pandemic and applied for unemployment on April 1. Still pending approval, he decided to make a Facebook group for Nevadans who also found themselves in unemployment limbo. His page has over 700 members, and pages similar to his have more than 20,000.”Sometimes I conduct a poll in the group to see how many people have received a check,” said Camacho. “It’s usually about 80% or more who say they haven’t.”As of last Thursday, 173,347 of the Nevada applicants who applied since March 15 had received an unemployment check, according to a DETR spokesperson. Nevada has received a total of about 390,000 initial claims in that time — nearly double the number of applicants who’ve received checks, according to the federal Department of Labor.Lisa Gecelosky and Nicole Hall found community in a social media group similar to Camacho’s, this one catering to Floridians waiting on their applications to be approved. Hall, a hairstylist in Cape Coral, Florida, says she’s been “pending” since March 22. Gecelosky is a licensed massage therapist in Largo, Florida.”People keep saying to be patient, but I can’t anymore,” Hall told ABC News. “I am not sleeping, I have anxiety, headaches; I just want to know when the money will come in.”Last week, Gecelosky took part in a virtual protest. Tagging Florida’s Department of Economic Opportunity, Gecelosky tweeted out a picture of herself holding a sign that read “‘Pending’ since March 20.””My office closed March 16, and I haven’t had income since then,” Gecelosky told ABC News, adding that her attempts to get in contact with the DEO have been fruitless. “It is a rollercoaster of emotions, I’ve called hundreds of times only to be disconnected.”Gecelosky signed in to her DEO portal Monday and finally received an update on her application.

“They deemed me ineligible,” she said. “I had to reapply … I am back to square one.”

Some Floridians say their applications were rejected without reason“I cried a lot this week, if I am being honest,” said Gecelosky. “You’re supposed to get some kind of message telling you why you were deemed ineligible, but I didn’t receive one and I know there are many others who didn’t receive a reason either.”Alfred Notaro, a Florida chef, commented on Gecelosky’s post during the virtual protest, claiming he’d been “pending” for over a month. He soon received similar news from the DEO.”After six weeks of pending, now ineligible and have to reapply,” Notaro told ABC News. “No reason was given. I’ve never filed for unemployment before and had no choice in this situation.”When asked about the Floridians who weren’t given a reason for their ineligibility, a DEO spokesperson said, “There are numerous reasons an applicant can be found to be ineligible, including incomplete or inaccurate information. For individuals who may have incomplete or inaccurate information, DEO is reaching out to assist in completing their applications.”

Even after approval, trust in the system remains brokenAizha Stecker finds herself in the 23% of approved Florida applications, but her experience applying compelled her to take part in the virtual protest of the DEO.”The process was a complete mess,” said Stecker. “I had rearranged my entire sleep schedule just to try and apply online, because if you weren’t trying to apply at 3 a.m., you weren’t going to get into the DEO’s website.”It took Stecker approximately a month to be approved. She says her trust in the DEO is strained beyond repair. She fears other issues could be on the horizon — even after she’s been approved.”I worry that if we take the pressure off the DEO, the money will stop — or we will all run into issues again,” said Stecker. “I am paying my bills strategically, because what if I don’t have money coming in again in a month or two?” Copyright © 2020, ABC Audio. All rights reserved.

Sean Penn confirms his “COVID wedding” and marriage to Leila George
‘Alarming’ rate of cyberattacks aimed at major corporations, governments and critical infrastructure amid COVID-19: Report
Re-Upper: Chip and Joanna Gaines rebuilding ‘Fixer Upper’ for their new TV network
Single mom sheds 55 pounds during quarantine — and she’s not quitting now
Trump says TikTok will be shut down in US on Sept. 15 unless a deal is made
Following COVID-19 halt, new episodes of ‘The Young and the Restless’ start August 10