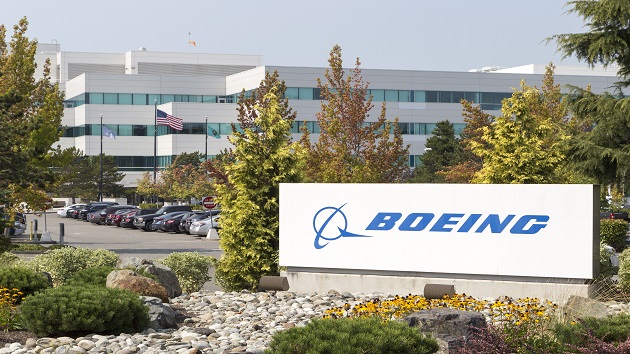 (WASHINGTON) — Boeing is seeking to cut roughly 10% of its workforce, or 16,000 employees, from its payroll through voluntary measures and “involuntary layoffs as necessary” as the COVID-19 pandemic delivers a “body blow” to its business, Boeing CEO Dave Calhoun said in an internal memo to employees.The manufacturer plans to reduce production rates for the 787 and 777, two widebody commercial jets. The cuts will be the deepest in Boeing’s commercial airplane unit.The “demand for commercial airline travel has fallen off a cliff,” Calhoun said in the memo.Airline passenger volumes are down 97% compared to a year earlier, according to Airlines for America, an industry trade organization that represents all the major U.S. airlines.In an interview with CNBC, Calhoun said it could take up to five years to see pre-pandemic passenger traffic levels.Boeing, which had already been struggling with financial issues related to the grounding of the 737 Max, reported a $641 million loss in the first quarter.The 737 Max has been grounded for over a year after it was involved in two crashes that killed almost 350 people.Calhoun said during a press call with reporters that Boeing is confident the plane will return to service in the third quarter.”Most of our work now is all about documentation,” Calhoun said. “It’s been that way for quite some time, and the documentation effort is a mountain of work to do.”Southwest, one of Boeing’s biggest customers, announced Tuesday that it is removing the 737 Max from its schedule through the end of October.The 737 Max production line was shut down in January, but Boeing expects to resume production at low rates in 2020, gradually increasing to 31 planes per month during 2021.Copyright © 2020, ABC Audio. All rights reserved.