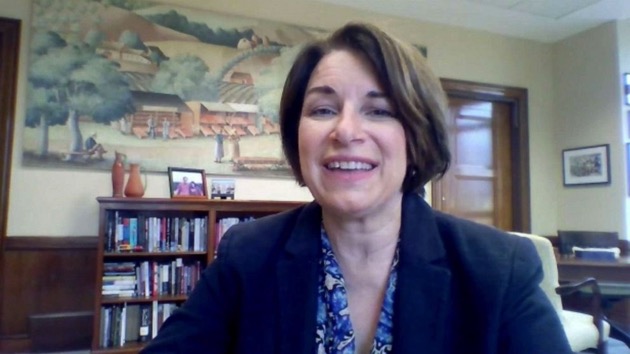 By MEG CUNNINGHAM(NEW YORK) — Minnesota Sen. Amy Klobuchar and her husband’s experience with coronavirus was like every other Americans, the Minnesota senator said on ABC’s The View on Tuesday.”It’s so scary how this disease is going to take a turn. I kept calling him. I was in Minnesota. He had a temperature,” said Klobuchar, who has been actively campaigning for former Vice President Joe Biden.” I found out what it’s like for so many families, you can’t hold the hand of your loved one. The health care workers are holding the phone up to their ear and for so many people the story is worse, that don’t take a turn for the better, the health care workers are the last one with their husband or wife or mother or dad. That’s the hardest thing about this disease. It is so incredibly lonely, and I’m just so happy he’s back.”Klobuchar announced in an official statement late last month that her husband, John Bessler, 52, and has no underlying conditions,had been released from the hospital and was recovering at home after testing positive for the coronavirus.He had been suffering from a bleeding cough and “dangerously low” oxygen levels, the Minnesota senator told Good Morning America host Robin Roberts in an update after he was diagnosed.Klobuchar said she was also told that she would not qualify for a test.Bessler urged Americans to continue following social distancing practices, because someone could have the disease, be asymptomatic and spreading COVID-19 to others.”This can really impact people who do have those underlying health conditions as well as people who really don’t,” Bessler said. “And so you just don’t know. It’s sort of a lottery, this coronavirus, in terms of what your symptoms are going to be like. So people just need to follow the rules, make sure they’re engaging in that social distancing even though it’s hard. Make sure that other people don’t get infected and so you flatten that curve.”Klobuchar said her husband is now going to donate plasma, since he has the immunity, and participating in a study which would use the plasma from those who tested positive. Whoopi Goldberg asked Klobuchar and her husband about their feelings about some of President Trump’s recommendations to Americans amid the pandemic.”So many people watch the president. He’s the leader of our country, and when you see him, whether he’s joking or not, literally looking at people and saying, basically implying, ‘You can chug bleach or, you know, maybe we can inject some light into you,’ that is the exact opposite of what a leader should be doing,” Klobuchar told Goldberg. “It’s also what he hasn’t done, and that’s what’s starting to become glaringly clear as you see the governors taking the lead in each state, but not every state has a mayo clinic like we do. You’ve got to have a national testing strategy and get those national tests out to every state in the country,” she said.In a recent interview with ABC Newss George Stephanopoulos on This Week, Klobuchar said amid the novel coronavirus pandemic, the country is suffering from a lack of national leadership in the White House.”Like every state in the country, George, we are suffering from one important thing, and that is a lack of national strategy,” Klobuchar told Stephanopoulos. “You know, we can tune out this president’s rants about chugging bleach, but we can’t tune out the fact that we have a lack of protective equipment, that we do not have enough testing.”Klobuchar, a former 2020 presidential contender, has actively campaigned for Biden and has been considered by many to be on the shortlist for a possible running mate.During the 2020 election cycle, vote-by-mail expansion has been a topic of contention as states scramble to troubleshoot voting during a pandemic. The quarrels center on expanding mail voting as states adjust to the unprecedented coronavirus crisis, particularly in key battlegrounds that could tip the scales of the upcoming presidential contest.Klobuchar is co-sponsoring a bill to set aside federal funding to expand vote-by-mail programs. Copyright © 2020, ABC Audio. All rights reserved.